Dust baths: why your chickens need one, how to make it and which materials work best?

Dust bathing has long been recognised as something chickens need to do for their own welfare. 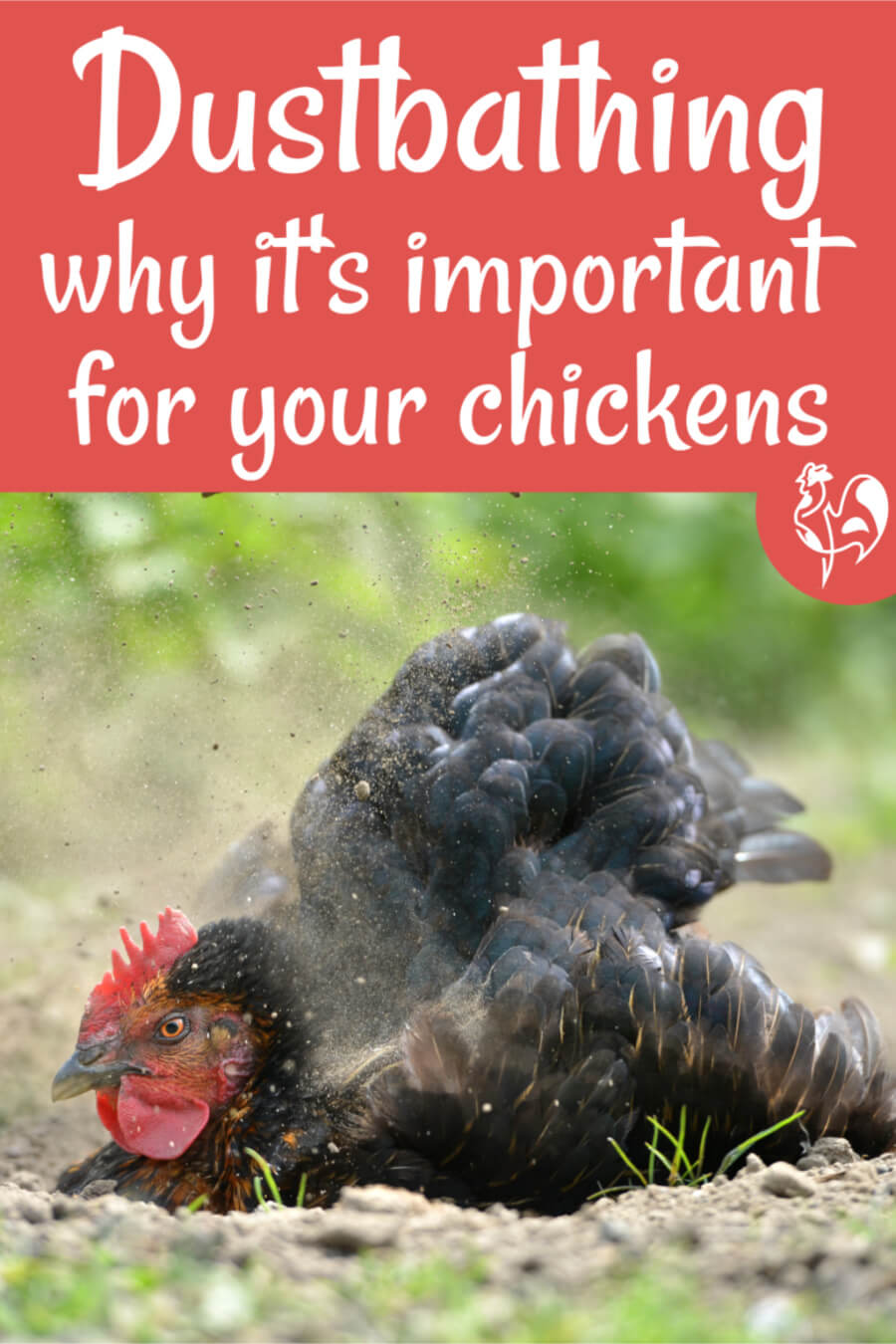 But what exactly does it mean, how can we make one that properly fulfills our flock's needs, and what's proven to be the absolute best material to use?

The first time you see it, you may be a bit startled. It can look like your chicken is having some kind of seizure.

Actually, they're simply indulging in a natural behaviour which is critical for their health and well-being.

In this article, we'll look at what dustbathing means, why it's so important, what a dust bath should contain and how to make one easily at home.

What is a dust bath and what does dust bathing mean?

A dust bath is just a place where chickens (and other animals) go when they want to indulge in one of their favourite - and important - pastimes: dust bathing.

It's considered such a critical activity for a chicken's welfare that in Europe, even chickens kept in battery farms must now have access to a place to dust bathe. Providing what are called "enriched cages" has been a legal requirement since January 2012.

Chickens who are dust bathing go through a pattern of behaviour: 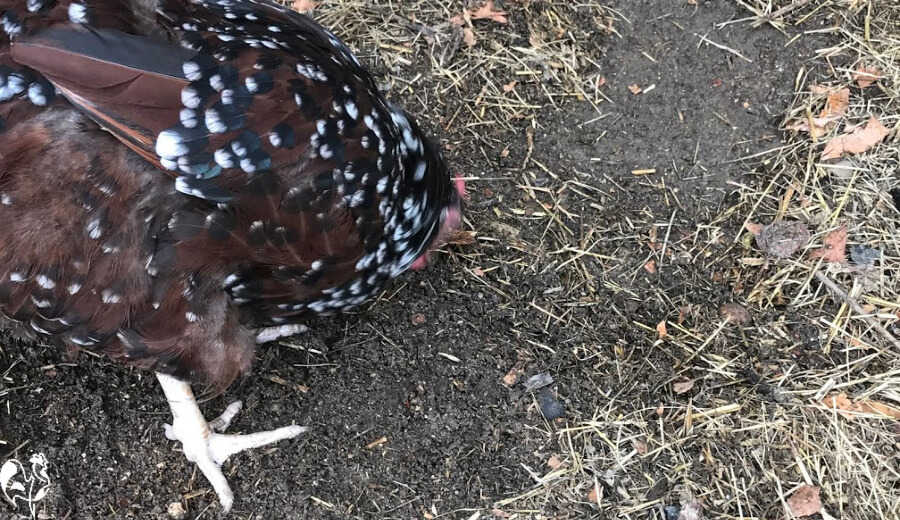 First, hollow out a spot! One of my Speckled Sussex hens prepares for a dust bath.

Want to see it in action? You can see a variety of those behaviours in this video of a group of my hens who gathered together for a dust bath!

On average, hens will dust bathe once every two days. Studies(e.g. 1) have shown that the process seems to be stimulated by sunlight, so they'll more often have their "spa" in the afternoon, when the land has warmed a little, rather than the morning.

The whole process should take between 20 and 30 minutes. Instinctively knowing how important the process is, a hen will normally take less than this only if disturbed.

Observations of chickens have also shown that dust bathing is a social activity - if they can, our ladies (and gents!) prefer to have their spa day together.

Why is dust bathing critical for chickens?

We know from studies and our own observations that chickens will try to dust bathe even when they don't have an ideal place to do it.

Why do they instinctively feel it's so important?

One of the most important facts about dustbathing is that it keeps the feathers and skin in good condition. 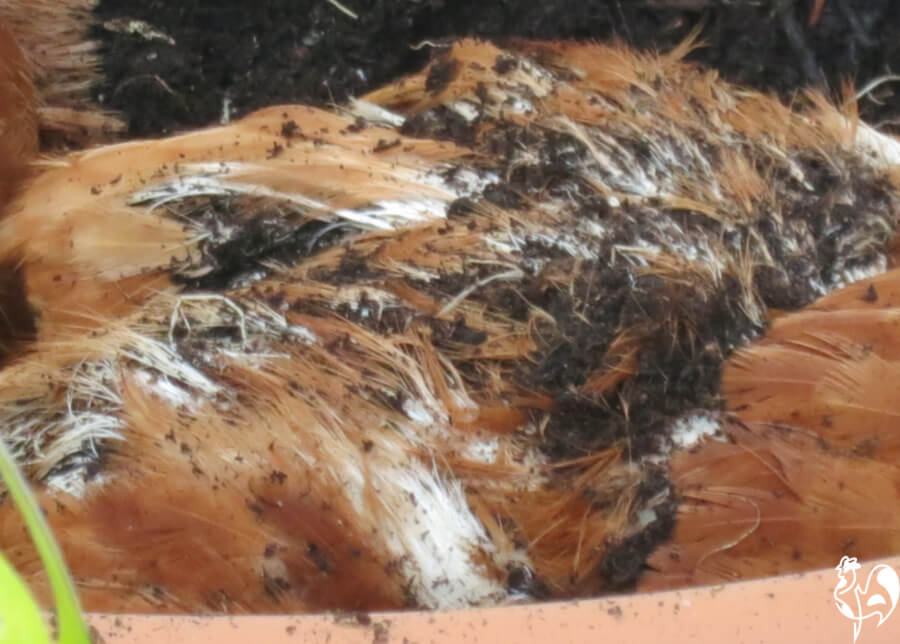 One of my Red Stars, dust-bathing. Soil within the feathers extracts oils and refreshes plumage.

Chicken feathers need a certain amount of oils (properly known as 'lipids') to remain water repellent. But as those lipids collect over time, they become stale. They collect along with dead skin cells and broken feathers, and the plumage becomes unable to protect the bird from either water or heat.

Tossing soil or sand into the feathers during dust baths, and preening the feathers by "pulling" the oils from the base with the beak, has been shown to get rid of that excessive build up(2).

The feathers are left clean, the down fluffy and the upper feathers more able to lie properly. The chicken is again able to use her feathers as insulation.

Parasites like lice and mites can be a problem within flocks, and feathers that aren't clean are known to attract them.

Why? Because the lipids we talked about above have been shown to act as food for parasites(2, 3).

So dust bathing is important not only to remove any parasites already there, but to remove the old lipids and skin cells in order to prevent parasites wanting to lodge in the feathers as a kind of eat-in fast foodery. 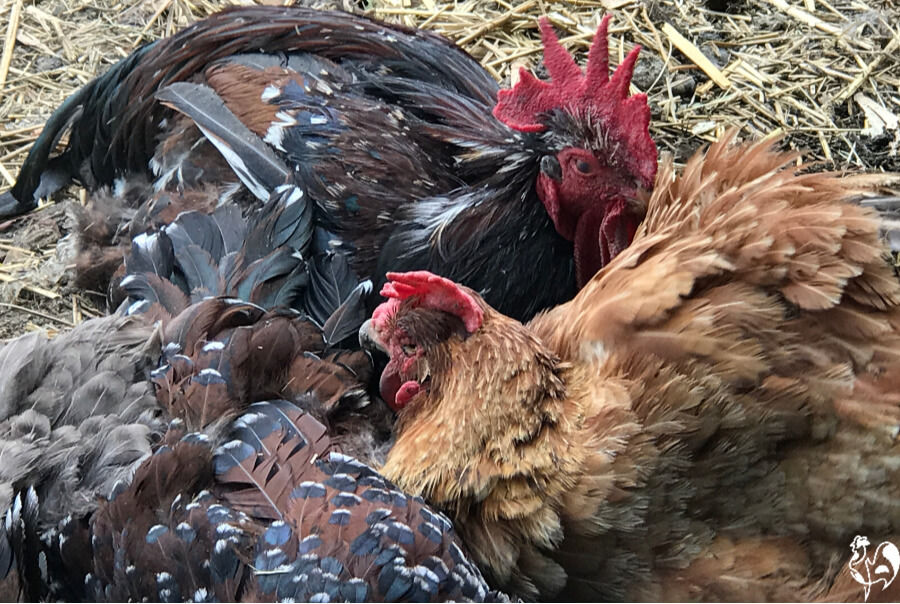 Mr Woo, my Speckled Sussex rooster, after a dust bath with his hens.

We know that chickens will try to dust bath even if they're housed on wire caged floors(1). But if they don't have access to dust baths with some kind of litter, they're much more likely to have issues with parasites and with poor feathering leading to health problems.

There's also evidence that having nowhere to dust bathe will lead to feather pecking. So if you have chickens who are constantly pecking at their own or somebody else's feathers, check whether you have good "spa"  facilities available to them.

At what age should chickens be given a dust bath?

Chicks love to dustbathe from a very early age. In fact, a study has shown that they seem to hatch with an instinctive sense of what would make a good substance for dust bathing(4).

In other words, if they see something they think would be good to dustbathe in, they'll go ahead and do it. I've seen this with my own chicks. They never choose to dust bathe in wood shavings but give them sand or peat and there's no stopping them!

Want practical evidence? Take a look at this short video of some of my five day old chicks.

What should a dust bath contain?

There have been a lot of scientific research papers about which material (known as "substrate") is best, and their findings are borne out by my own experience.

Here's a summary of what they show. 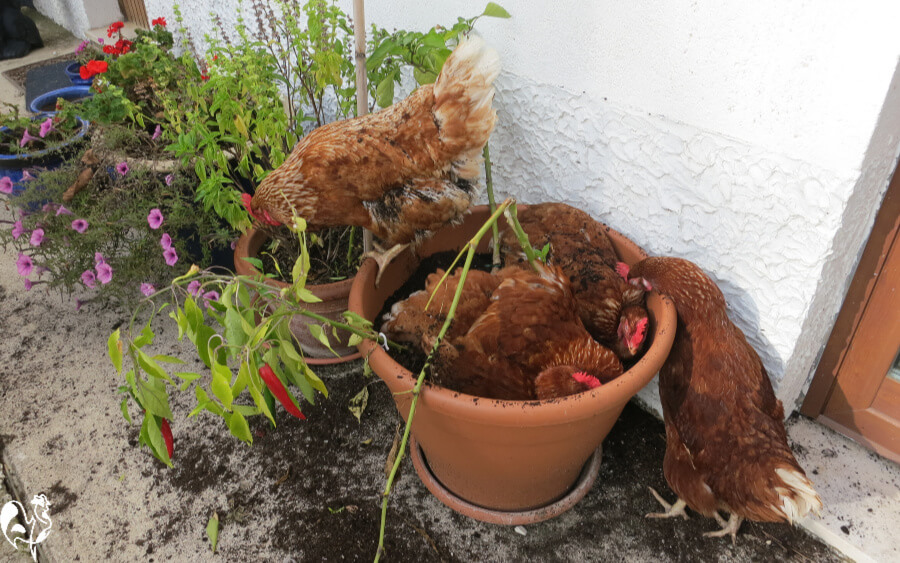 When these materials were tested for effectiveness both in terms of cleaning stale lipids and getting rid of parasites, it became clear that chickens instinctively know what's best.

The best material for dust baths is...

So in order of both preference and effectiveness, the materials chickens will choose for dustbathing are:

Using diatomaceous earth in a dust bath - yes or no?

Diatomaceous earth (DE) is controversial. I've written about why, and what the pros and cons are, in this article. Read it if you plan to use DE in your dust bath.

Evidence from studies(7) is that DE used in a dust box with sand as its base prevented mites after a week's use. But they returned as soon as the dust box was removed.

So use it if you're comfortable with it - but only when mixed with other materials, never on its own. 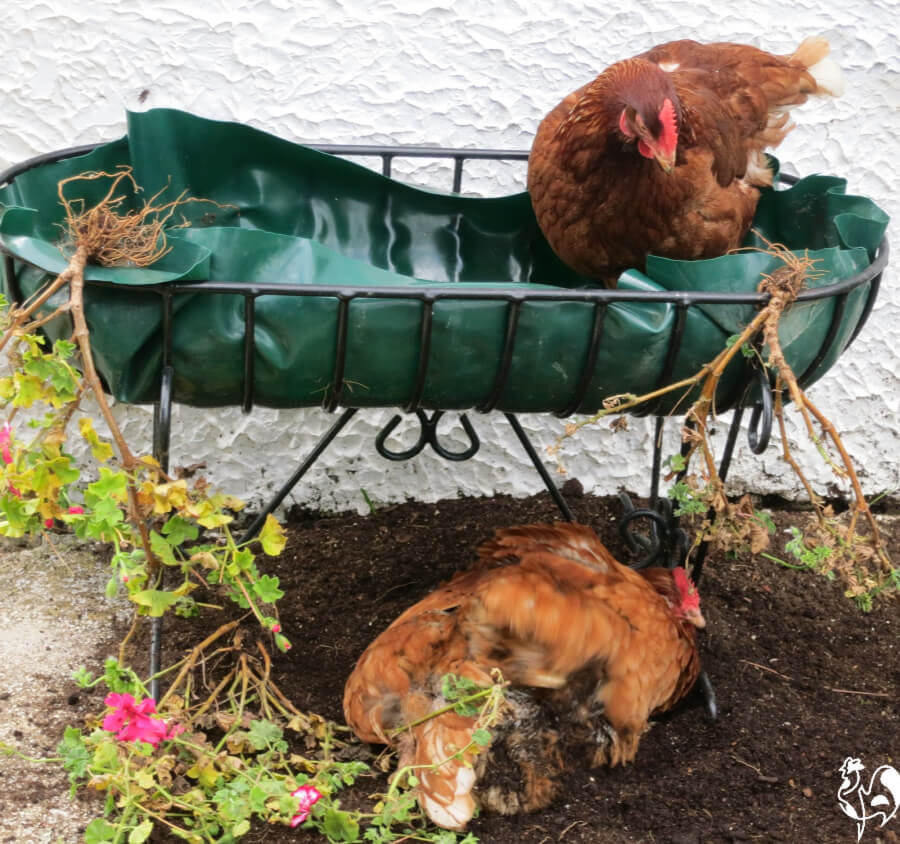 Two of my Red Stars kicking compost from my planter to use as a dust bath.

Here's the truth: you can provide as many pretty dust baths as you like. In the end, your chickens are likely to ignore them and find their own preferred spot. 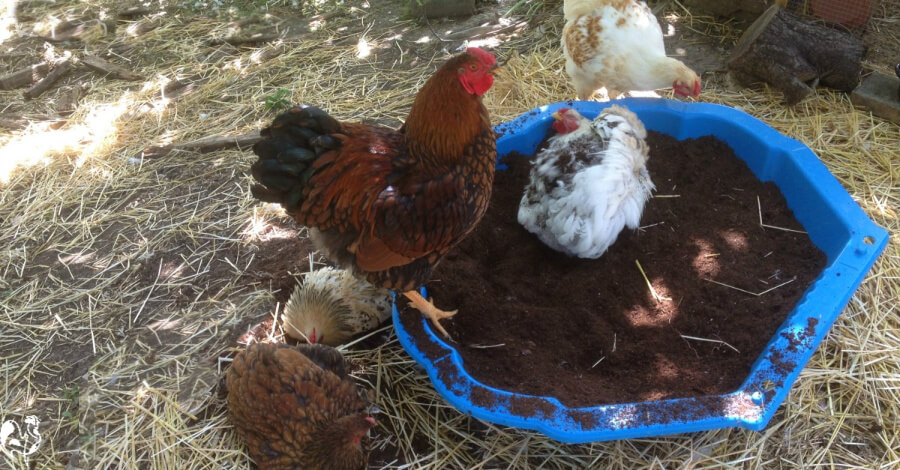 Some of my chickens try out a child's sandpit filled with compost as a dust bath.

There are a few pointers from studies which can help us provide the best possible environment. 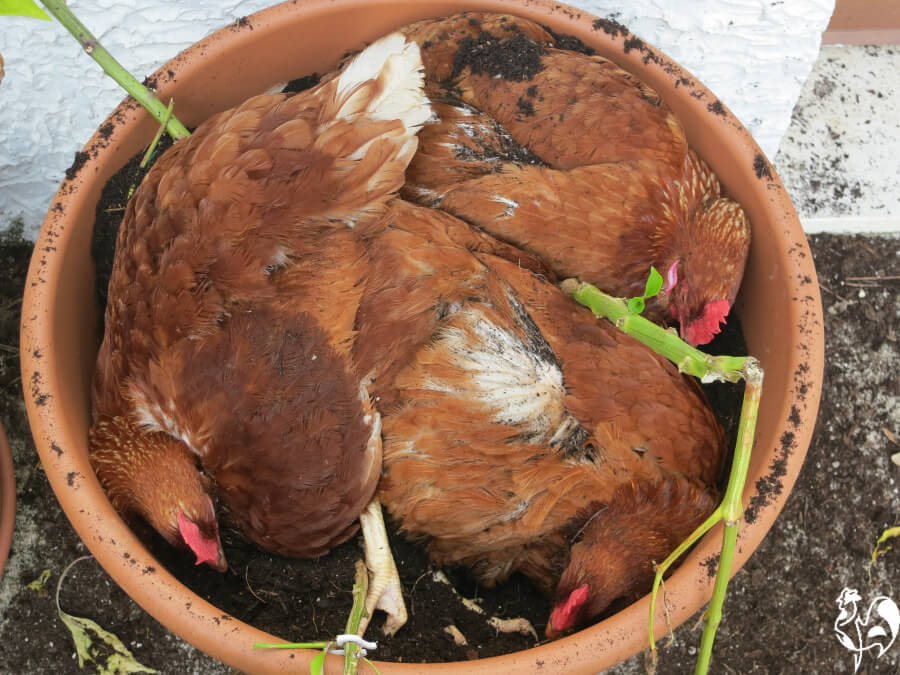 There are three hens in that pot!

Enjoy watching your chickens have their spa days! 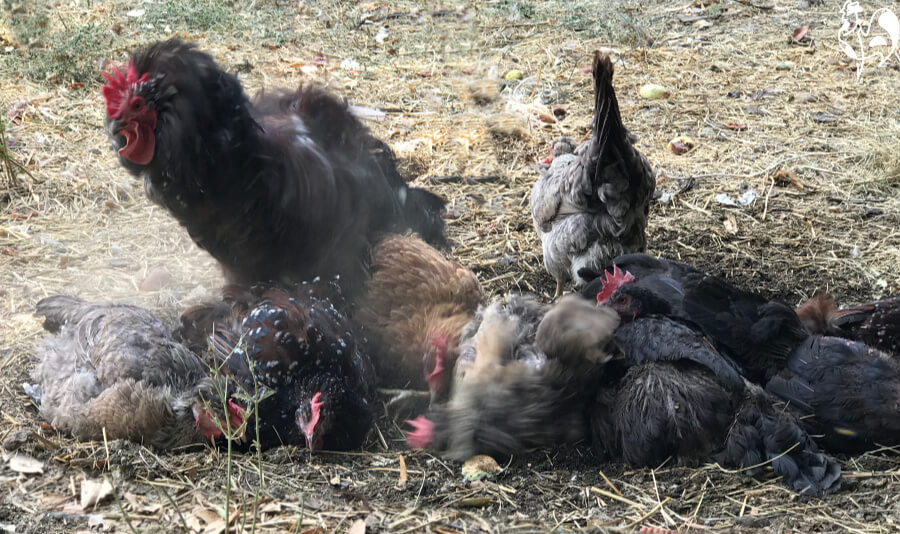 Even a rooster needs a treat! Some of my chickens enjoying their spa day.

If you found this article useful, you may like these.

4. A. Patherick, J. C. et al: The role of perception in the causation of dustbathing behaviour in domestic fowl. Pub. Journal of Animal Behaviour, 1995.

7. Martin, C. D. and Mullens, B. A.: Housing and dustbathing effects on northern fowl mites and chicken body lice on hens. Pub. 2012.