Brooder lamps: a review of the Brinsea EcoGlow.

What is a heat lamp and why is it important in the brooder?

Fact: new chicks aren't able to control their temperature. Their downy fluff is not enough to keep them warm. Without a mother hen, they need to have additional help until they grow feathers.

So we need to be that mother hen, and help them stay warm enough to survive. 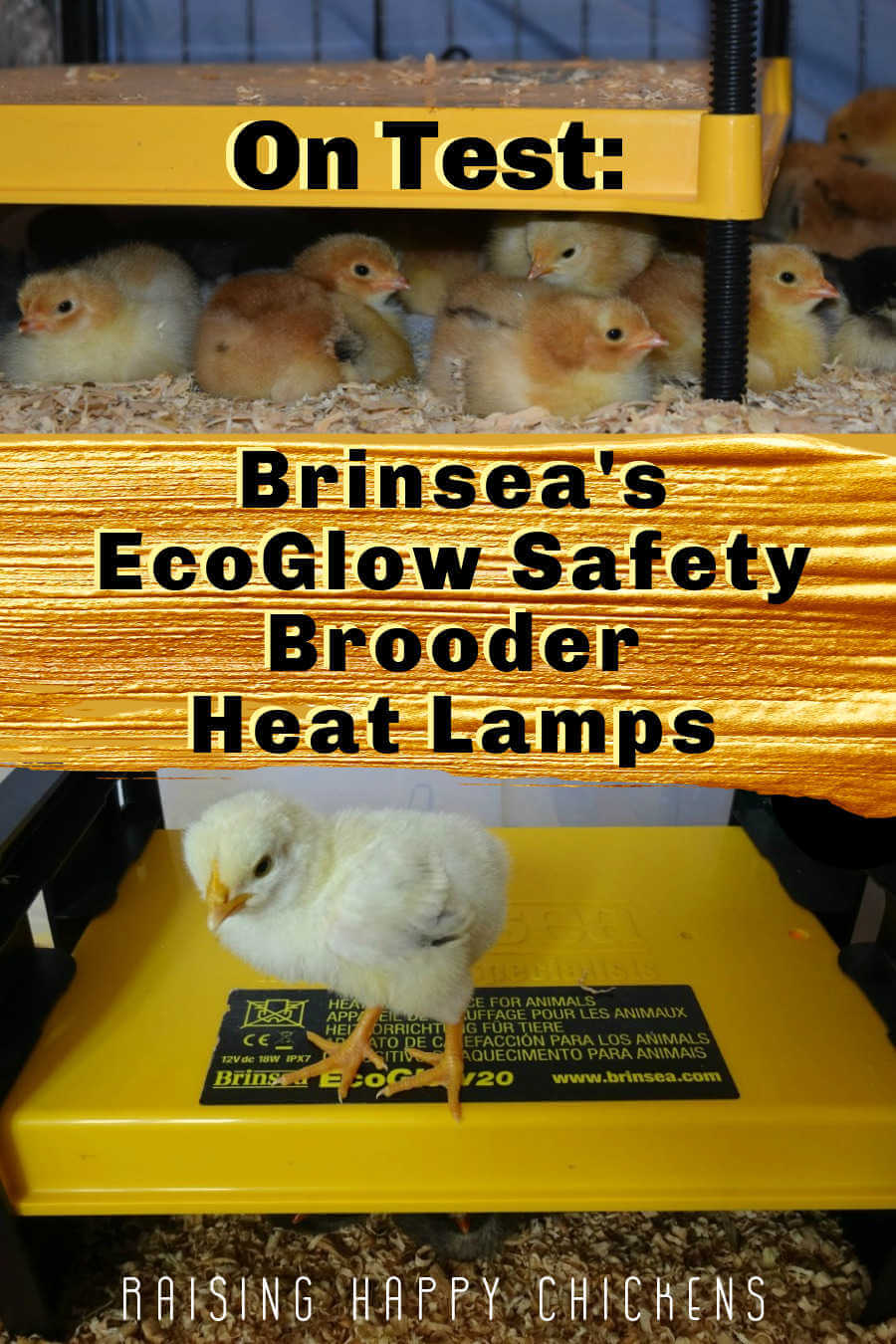 For that reason it's imperative to have a safe, reliable heat source in the brooder to keep chicks warm when they're first hatched.

Traditional heat lamps can be dangerous. They start more fatal fires each year than any other piece of equipment.

In this article I look at why, and how to find a safe source.

I use my many years' hatching and brooding experience to review what are said to be the best and safest brooder lamps on the market: Brinsea's EcoGlow Safety.

There are now (2022) three separate sizes: for up to 25, 35 and 50 chicks. I'm reviewing them together because they're essentially the same.

The question I will answer for you: are they value for money? Do they serve the purpose they were made for – to keep chicks warm enough?

But let's start at the beginning.

What is a brooder lamp?

It's simply a method of adding reliable heat to the chick brooder, to make sure that chicks are able to sustain the right temperature to allow for safe and  development.

Knowing what temperatures chicks need at different points during the first eight weeks is critical.

Why not use a traditional heat lamp? 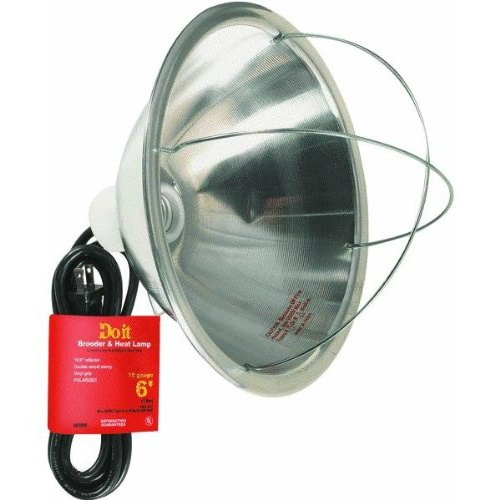 Which is why I will never use or recommend this type of heat source for either a brooder box or a chicken coop.

I've seen too many examples of livestock - usually but not only chickens - killed by fires started by one of these.

They come specifically recommended for brooders, but if the front of the lamp touches anything flammable - a cardboard brooder, chick down or feathers, or bedding, for example - there is a real risk that the heat will set it on fire.

Which is why radiant heat lamps are far safer.

If you purchase a product through links on this page I receive a small commission at no cost to you. I was not paid for writing this review, and I did not receive the product as a freebie. I'm suggesting it for you because I own it and love it, and I think you would, too. For more information please see this policy.

How does the Brinsea brooder heat lamp work?

There's a reason it's called the "EcoGlow Safety" brooder lamp.

Unlike a traditional heat lamp, all the Brinsea brooder lamps work on radiant heat. Whereas normal heating relies on a heat source warming the air, this works by an element warming on contact. 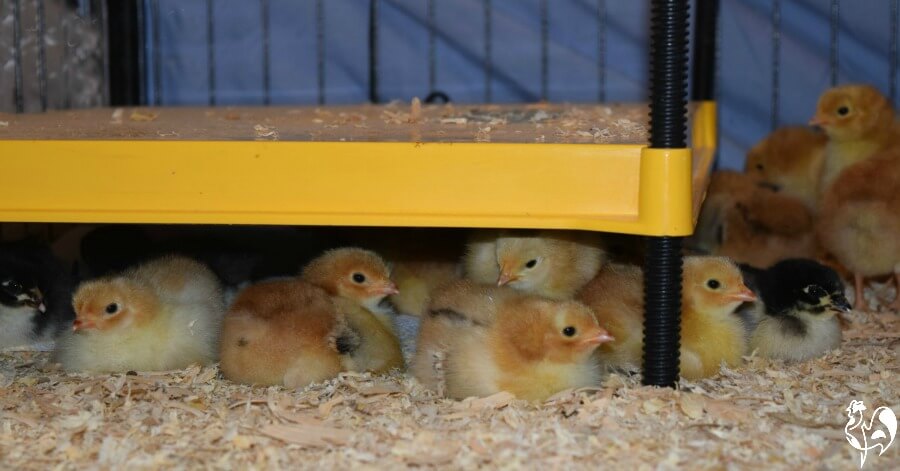 A batch of my chicks snuggling under my 5 chick EcoGlow Safety heat lamp. Click to buy.

The black metal warming plate on the underneath of the unit spreads heat evenly and does not get hot. When the chick's body is placed close to it, it transmits direct warmth from the element to the chick. There is no heat source to spark a fire.

In that sense it's much more like the way a mother hen would warm her chicks, which is partly why I like it.

A lot of reviews of this product don't understand this principle and people get very worried that the unit itself does not get hot.

It doesn't need to. 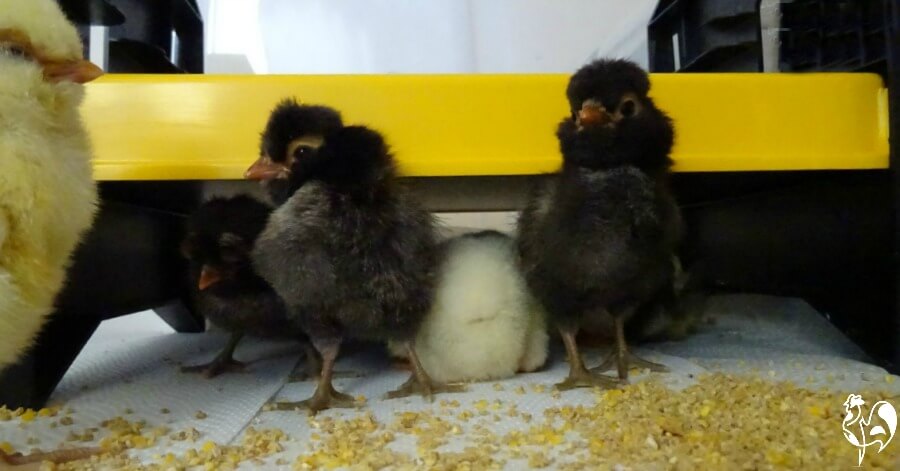 Some of my newly-hatched chicks under the original small EcoGlow. Click to buy. 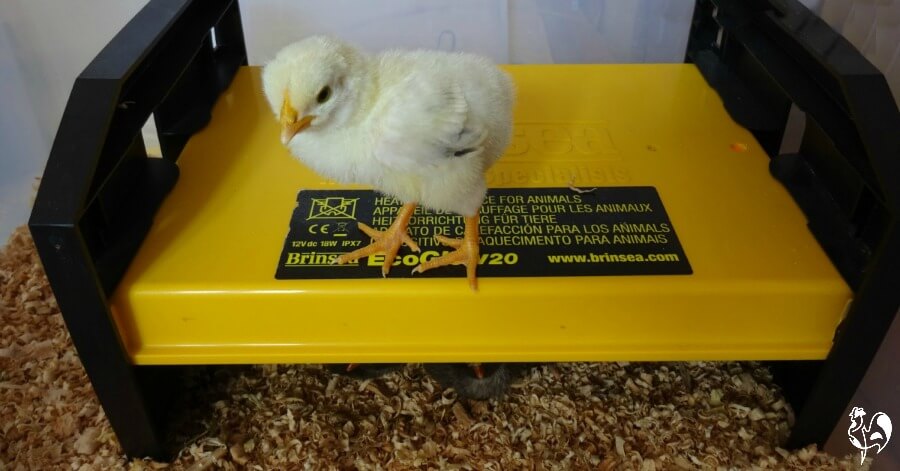 The original small EcoGlow 20 - the height was hard to manage.

To buy the smaller EcoGlow (20 chicks) click the button below.

Update, January 2022: Brinsea seem to have withdrawn the smaller brooder lamp. I've contacted them for information and will update here when they respond.

In the meantime, this link is for the larger heater. 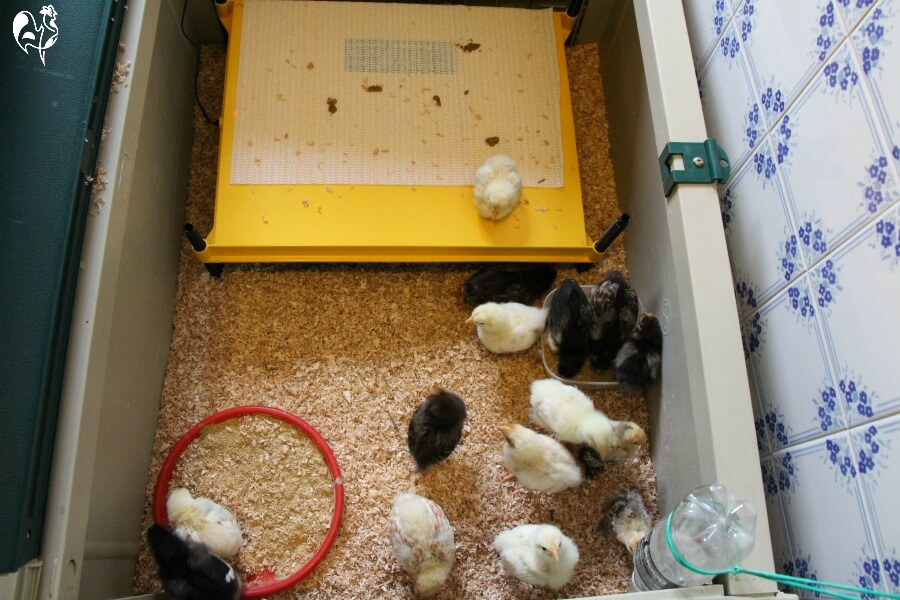 Even at 3 weeks old, my 18 chicks were cramped under the EcoGlow 20 and needed to graduate to the EcoGlow 50.

As you can see from my box below, this used to be called the EcoGlow 50. Even since this photo, Brinsea have slightly altered the design although it doesn't alter the basic workings. 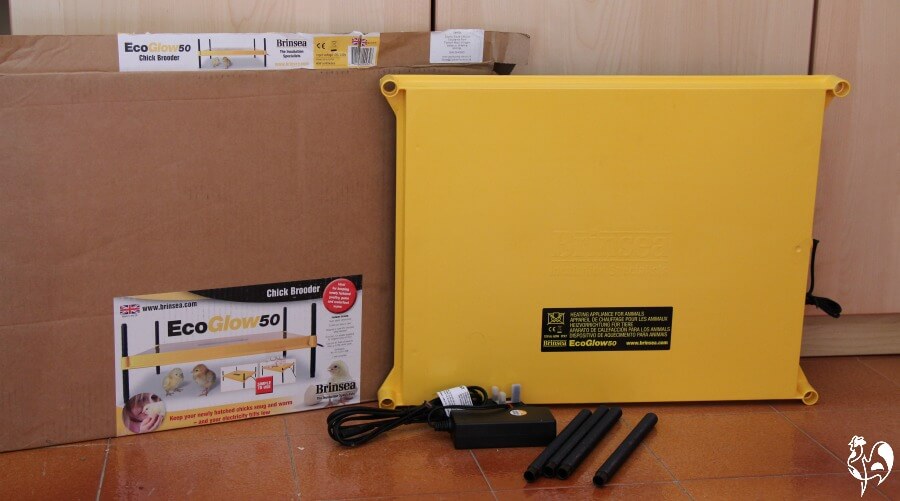 The EcoGlow 50 was renamed to Ecoglow 1200. Click to buy from Amazon.

To buy the larger EcoGlow (35 chicks), click the button below.

They love both the small and the large units. I've never had any problems with the chicks taking to them straight away. They seem to find the radiant heat comforting.

It's probably as close as we can get to having a mother hen.

My chicks disappear under these brooder lamps as soon as they come out of the incubator and on day 1, tend to spend a lot of time sleeping underneath them, occasionally peeking out at the world. 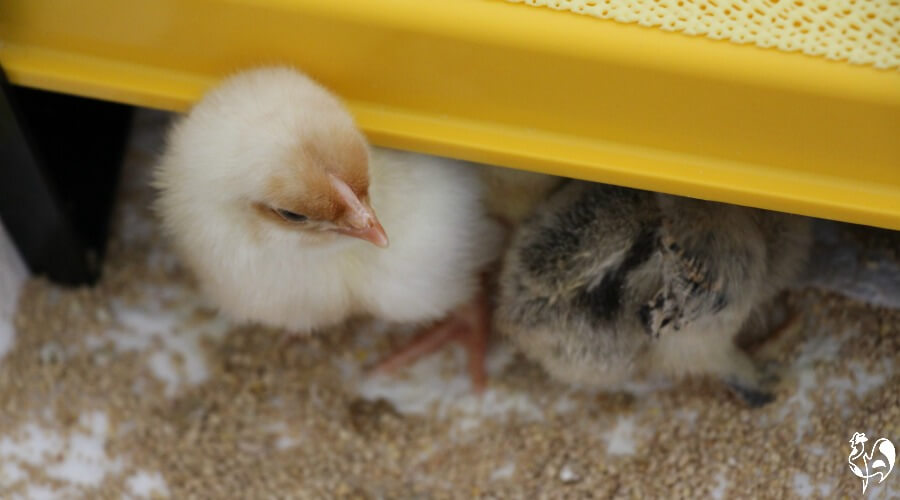 My one day old Wyandotte chick being daring!

By day 2 they venture further out to get food and water, scuttling back underneath if anything startles them. 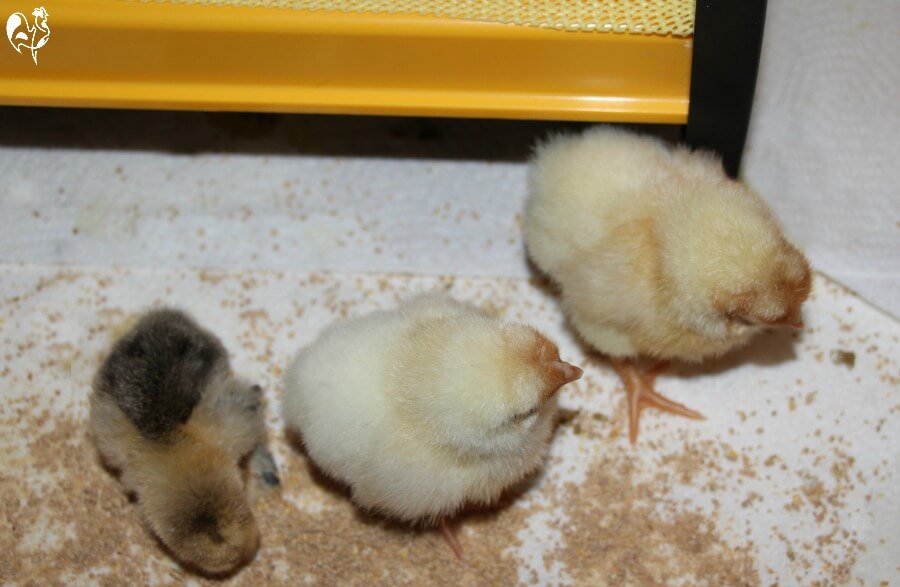 The same Wyandotte chick leads a first outing for food!

By day 4, the more adventurous (this Wyandotte chick was always the adventurous one!) will be experimenting with using it as somewhere to take a break from everyone else ... 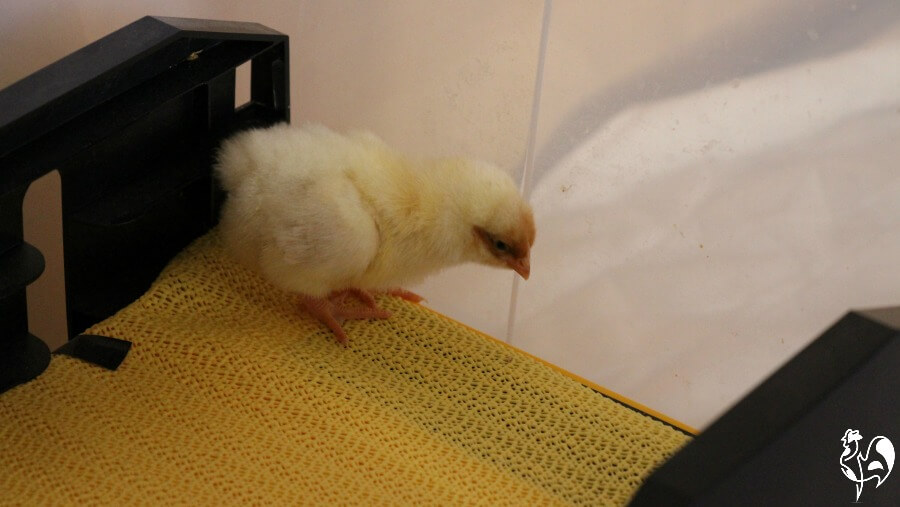 Note the non-slip covering - more about that, below.

... and by the end of the first week you'll find they'll all be using it to do acrobatics, as a launchpad for their first attempts at flying, and as a good place to start trying to jump out of the brooder.

It makes great entertainment - for them and for me!

On my photos, you'll see that I used to use a non-slip cover for the top of the EcoGlows. Chicks make a lot of mess! 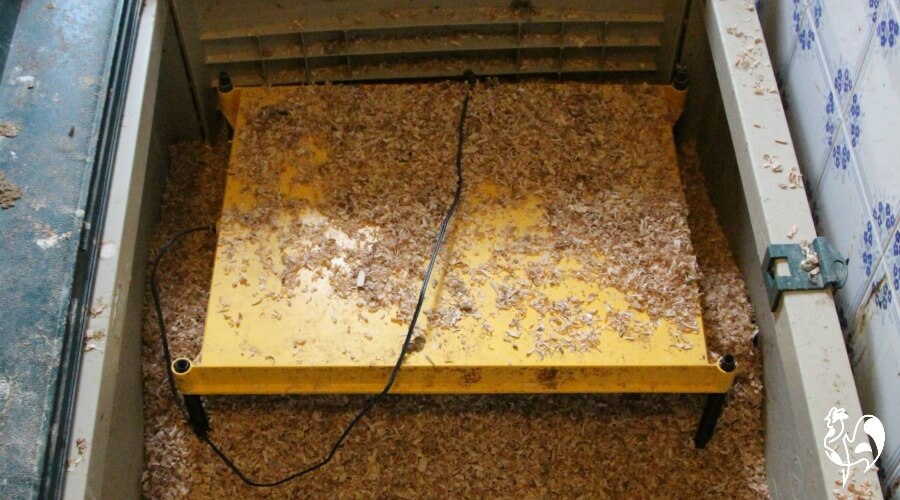 Yep - chicks make a mess! My EcoGlow 1200 before the Brinsea cover was available.

Brinsea took that feedback on board too, and have now created a plastic top which fits neatly over both the large and the small sized EcoGlows.

If you still have an older EcoGlow 50, you'll need to buy the cover, or keep using the non-slip shelf liners!

I have had both the large and small EcoGlow brooder lamps for several years and love them both.

Over time, Brinsea have taken feedback and improved their design which is a tribute to their willingness to take criticism and deal with it positively.

I've found both models reliable and inexpensive to run. The fact that I've been using the small model for over ten years is itself a testament to their value.

And perhaps most importantly of all, all my chicks have been kept warm and safe underneath them. I have never had a single chick death from over- or under- heating.

If I had to choose, I'd go for the EcoGlow 1200, just because it provides plenty of space for quite a large group of chicks.

What do reviews say? 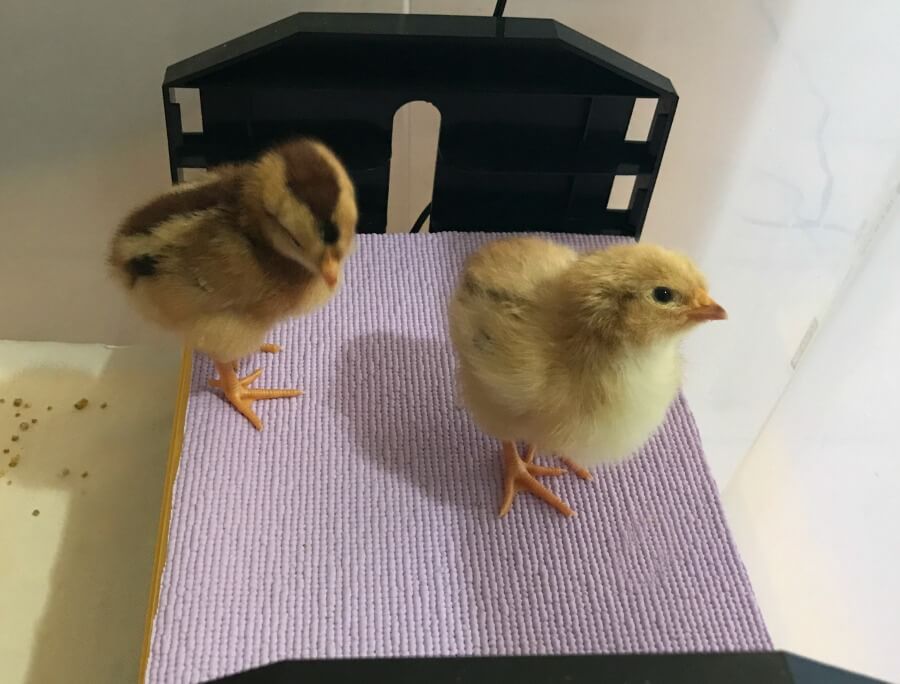 Which would be the best brooder lamp for you?

Would I recommend them?

If you've ever read any of my other product reviews, you'll know I use a "golden egg" scoring system, where one egg means "don't waste your money" and five means "this product is a must-have".

For both the EcoGlow heat lamps, my award is...

If you're thinking of incubating, hatching and raising chicks, you might find these pages helpful. 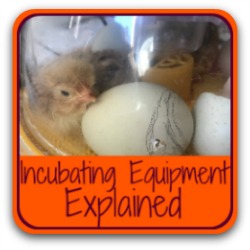 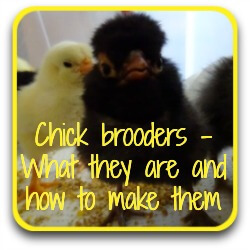 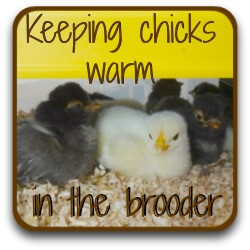 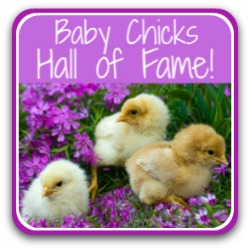