Facts about the raccoon: how to stop your flock being killed by this super-predator.

Raccoons may look cute but they're vicious killers. Here are facts about their behaviour and 14 tips to help protect your chickens from attack.

As with any wild animal, I advocate starting with tolerance, learning facts about how the problems begin and practicing prevention.

It's always a good idea to understand something about predator behaviour in order to deal with the problem effectively.

But if you want to skip straight to information about how to prevent raccoons killing your flock, here's a quick link. 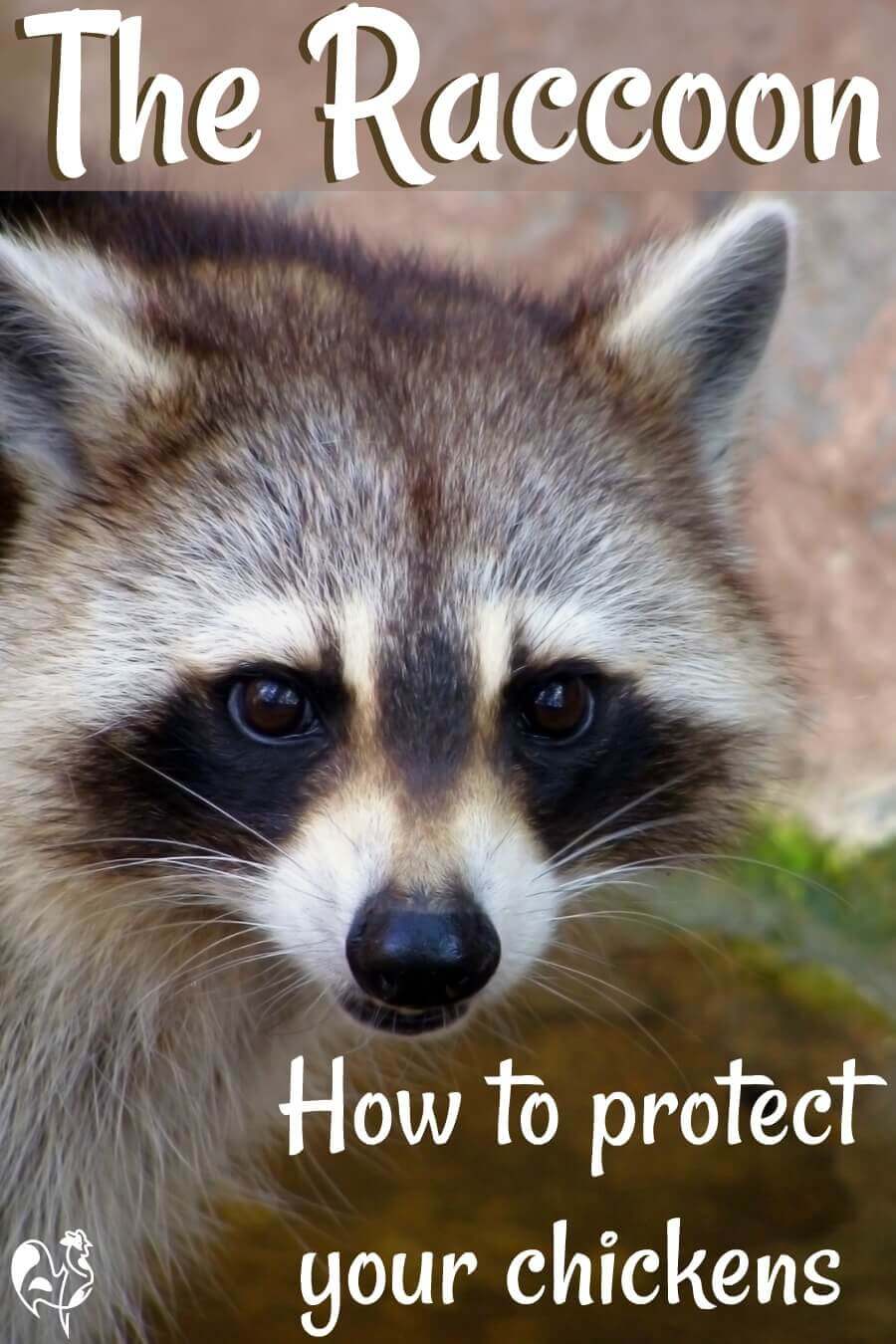 Some people keep them as pets. Their masked face commonly gets them the cute title "bandit". But raccoons, - procyon lotor - are one of chickens' deadliest predators.

We're fortunate not to have raccoons in Italy. But from chicken-keepers in other parts of Europe and in the States, I know how deadly they can be.

Raccoons will rarely eat a whole adult chicken. But if you find your flock killed and most of the body left, it's likely to be one of two culprits: a member of the weasel family, or a raccoon.

To be able properly to protect your chickens, it's important to know the signs of a raccoon presence.

Here's how you can use facts about the raccoon to understand how to protect your chickens.

Raccoon facts: how to tell if you have a family nearby.

You're most likely to see raccoons during the late summer and autumn (fall). Baby raccoons, known as cubs or kits, who are born in the spring are weaned by summer. They're gaining their independence and looking for a territory of their own.

And all ages are stocking up on food reserves to see them through their winter semi-hibernation.

But there are signs of raccoons all year round. Here's how to tell.

One of the simplest ways to tell whether you have any animal living nearby is to listen for their call. Raccoons are easily distinguishable. They're one of the most vocal predators and have a number of sounds.

Listen for them from dusk, which is when they do most of their hunting.

This is the most common raccoon sound: a kind of high-pitched chattering noise.

And here's the sound of an angry raccoon - a very different, low-pitched growling.

Look out for raccoon tracks. 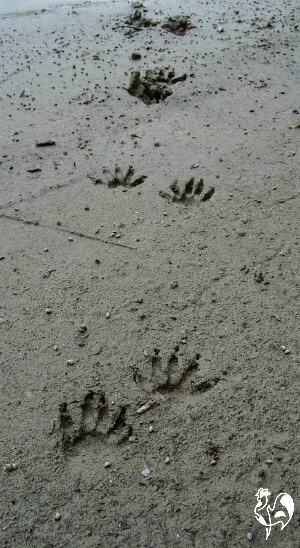 Raccoon tracks are distinctive. They walk on their whole paw, so their prints are very like a hand: five long digits with a claw at the end.

Front and back tracks are exactly the same.

These digits are one of the raccoon's characteristics that make them particularly deadly for chickens.

The long, dextrous "fingers" and a separate thumb make them easily able to hold and open locks and latches.

The claws are razor-sharp knives and the whole hand is so sensitive that the raccoon uses them to "see" objects just by feeling them.

The raccoon's droppings aren't as pungent as the fox's. It's generally about ¾" in diameter and between two and three inches long, blunt at both ends.

The danger of scat for both chickens and humans is that it often contains roundworm. If you find a raccoon scat "station" - a place where a lot of scat has been left - it should be cleared by a hazardous waste expert due to the amount of roundworm likely to be present.

Unfortunately, in urban areas where raccoons have established themselves, those "stations" (also called "latrines") are often found in houses, particularly in attics.

Where do raccoons live? Look up!

Once a dweller of forests close to water, the raccoon will now make their home - called a den - almost anywhere food is freely available. And as they eat more or less anything, that means cities as well as rural areas.

Their preferred habitat, especially in spring when they have baby cubs, is a tree hole or rock crevice. They're opportunistic animals so if they can't find something suitable, they'll use whatever else comes to hand. 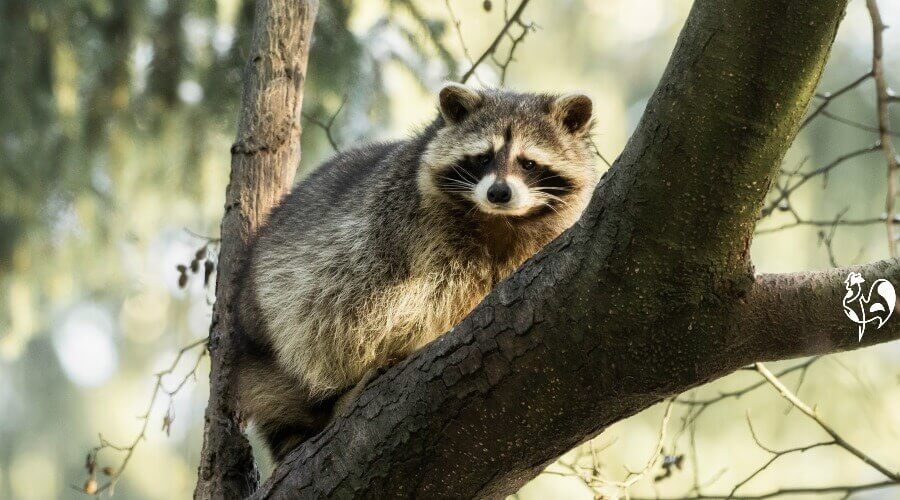 Excellent climbers, the raccoon's preferred habitat is a tree.

Burrows other animals have left, and dense undergrowth should all else fail, works for the rural raccoon. For the suburb or city dweller, attics are a favourite. But barns, spaces under a deck or even an abandoned car will do if attics are impenetrable.

Raccoons hunt at night. During the day, they'll rest in the hollows of trees, and will look for trees to climb when threatened. So if you hear or see other signs, look up - especially in the branches of oak trees.

Raccoon facts: what do they eat?

Camouflaged by their coat, raccoons generally hunt at night although in urban areas they've been known to scavenge during daylight hours. And they're omnivores: they will eat more or less anything.

In the wild, the raccoon is an excellent hunter of water-based food: frogs, crayfish, whatever they can find. They combine the ability to see at night with lightning-quick paw movement to prove a lethal aquatic killer. 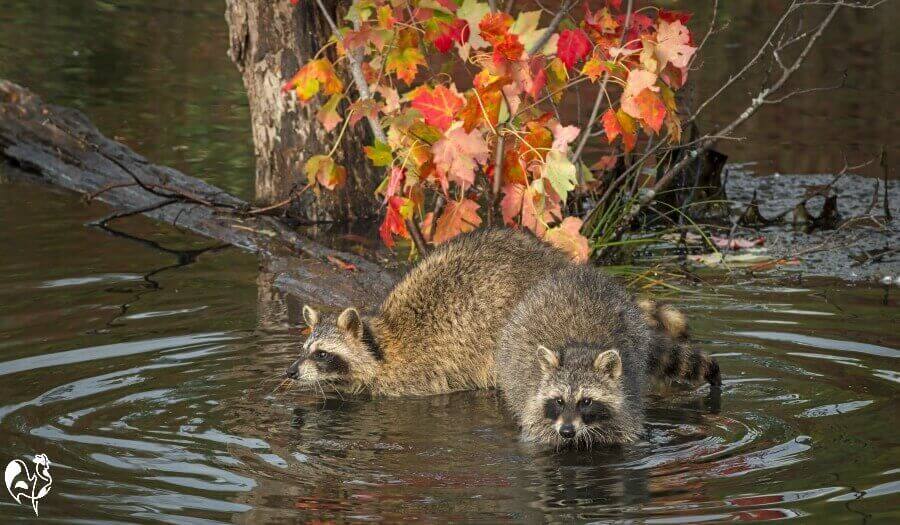 Raccoons are excellent hunters in water as well as on land.

On land, the raccoon will alter its diet depending on the season. In autumn (fall) the preferred meal will be fruit and nuts, which help build up the fat necessary for winter hibernation.

In spring and summer, though, the raccoon will enjoy meat in the form of insects, worms and rodents - and baby chicks if they can find them. They're also excellent at seeking out eggs.

Adult chickens are generally too large for a raccoon to carry off. So while it will eat the head and crop, the body tends to be left behind.

In urban areas they're attracted by human food, so keeping waste food in insecure containers will attract them. Bins (garbage cans) are no protection: the raccoon's nimble fingers will easily remove lids(1).

We've already seen that raccoons carry roundworm in their droppings which can be picked up and eaten by your chickens, infecting your flock in a very short period of time. It's also a risk for humans, particularly if your children play in an area where raccoons have invaded.

And importantly, raccoons are also considered to be a primary carrier of the rabies virus in the United States. Even though your chickens won't catch rabies from a raccoon and only one person is known to have died from a raccoon to human transmission of rabies(2), it's not a risk you should take.

How the raccoon finds chickens. 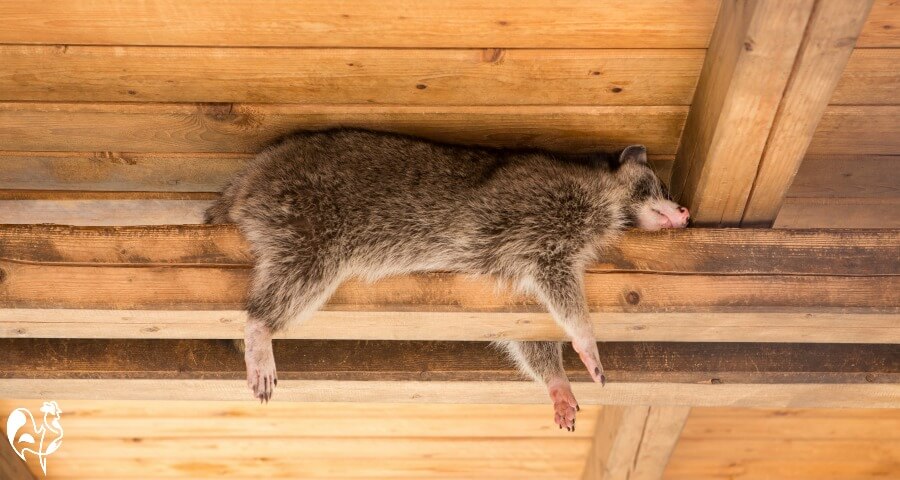 This is what you do not want to see asleep in your chicken coop! 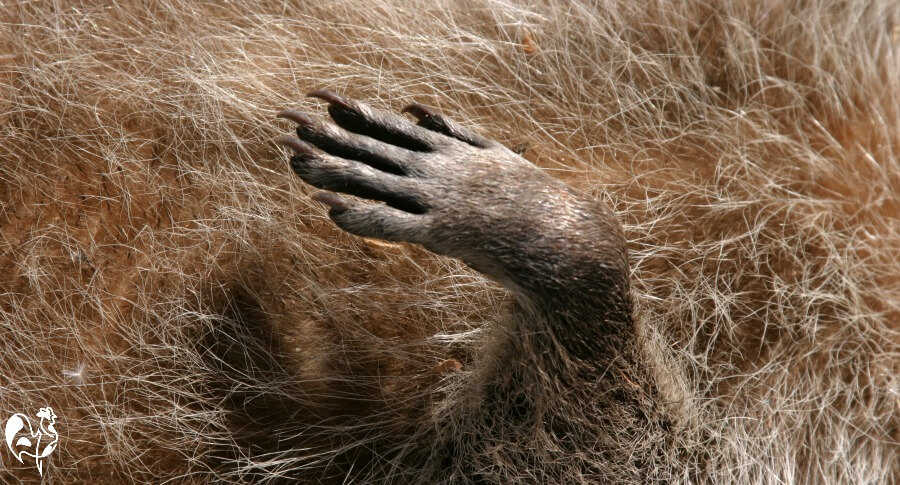 The raccoon's fingers, like a human hand, are easily able to pick locks.

How do these facts about raccoons help protect chickens from harm?

Please note: there are ways of living alongside wild animals that don't involve either killing or relocating. They are the solutions I use with my chickens.

In any event, abandoned dens will be rediscovered by other raccoons. And in some parts of the US it is illegal to either kill or relocate raccoons. Check your own area before taking any action.

Once you understand something about the raccoon's behaviour and characteristics, it's not hard to work out what needs to happen to protect your chickens.

There are two key areas: preventing entry, and avoiding attracting them in the first place.

Some people keep raccoons as pets. It's not advised by wildlife experts - the raccoon is not a domesticated species and, as we've seen, can carry disease.

If your neighbours have them as pets, or if they regularly feed them, ask them (politely) not to. Explain the damage they can do not only to chickens but to humans.

And if you see a wild raccoon, never try to corner it. Like any cornered animal, it can become vicious in its attempt to defend itself.

Baby raccoons may look cute, but they learn to climb and kill very quickly.

Because raccoons are opportunistic feeders, the main method of controlling them is by shutting down the source of food. Once they no longer have a tasty take-away, they'll lose interest.

Remember: however cute he may look, the raccoon is not your friend! 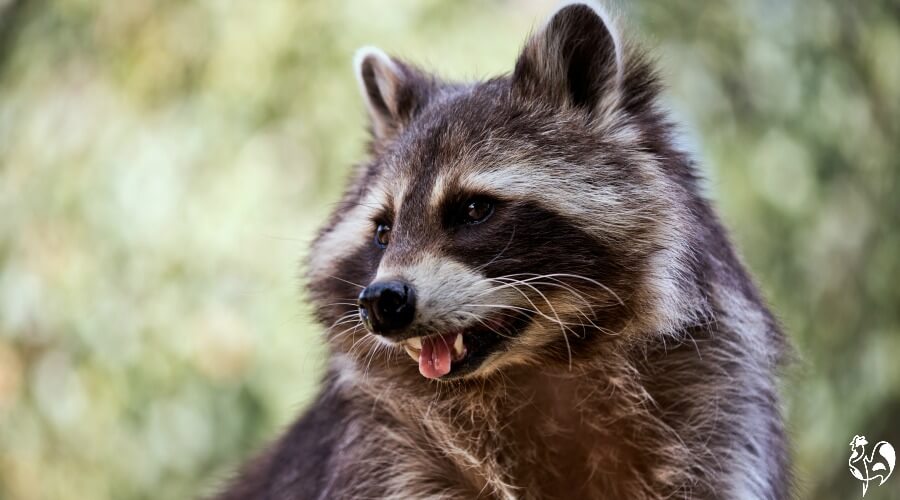 Some other pages about how to keep your chickens safe. 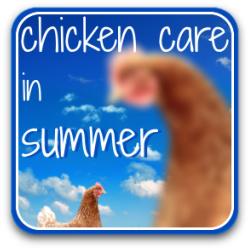 1. Galef, B. and Giraldeau, L: Social influences on foraging in vertebrates. Pub. Journal of Animal Behaviour, 2001.