What should chickens not eat?

Chickens will eat practically anything. But it's important to know what's good for them and what's not. 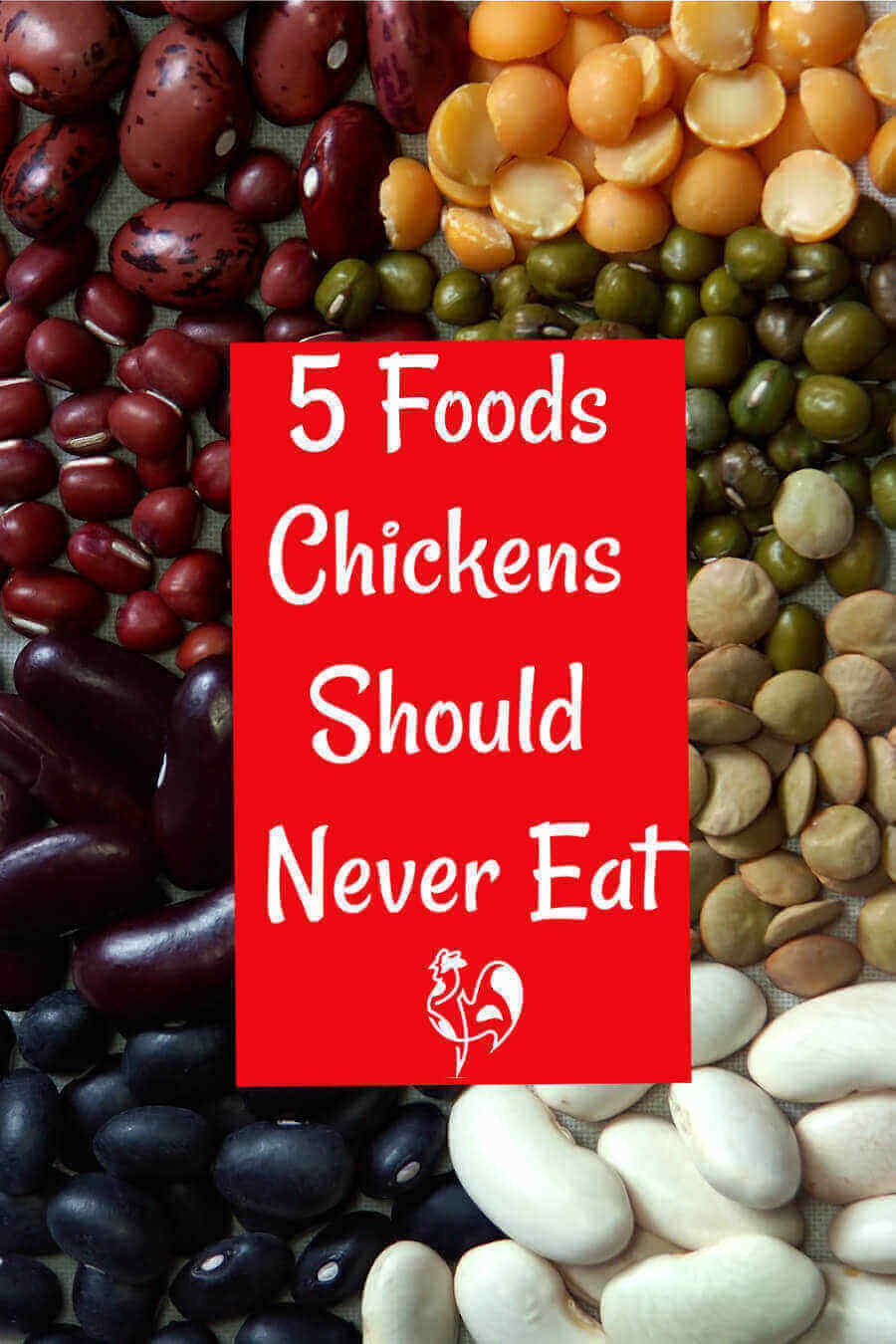 There's a lot of conflicting information about what chickens should and should not eat.

I found it extremely confusing when I started out. Where did the information come from, and which was accurate?

Because it clearly couldn't all be right.

With experience and research I've discovered that there's actually very few foods which will kill chickens.

Some won't do them much good and some may make them ill if eaten in very large quantities. But very few are actually fatal.

Nevertheless, my research has shown that some foods are potentially killers for your chickens.

So here are the five foods your chickens should never eat.

1.  Never, ever allow your chickens to eat dried or raw beans.

Dried beans are known to create very serious illness and even death in adult humans.(1) For chickens, they are always fatal.

Kidney beans are the worst culprit, but any bean which has not been properly cooked is potentially lethal for your chickens.

Beans contain a toxin called phytohaemagglutinin which is always fatal to poultry.

Illness will occur after eating as few as three or four beans and will progress very rapidly, killing in as short a time as an hour.

Once eaten, there's nothing to be done to save the bird(2).

They will probably avoid them anyway, but to be safe, keep any bean plants well out of the way of your chickens. 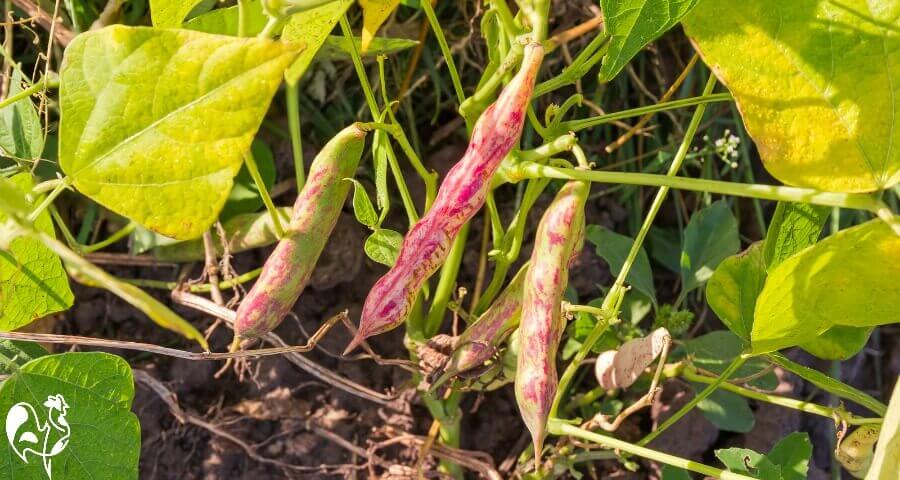 Any beans you want to give your hens should be thoroughly cooked. Soaking alone is not enough, nor is cooking in a crockpot or slow cooker. They don't reach high enough temperatures to de-activate the toxins.

You should not use dried beans for sprouting, either. Seeds such as sprouted lentils are healthy and carry no risk of poisoning.

To make them safe for both humans and chickens, beans should be soaked in cold water for at least five hours - preferably longer. Then, discard the water, rinse the beans thoroughly and boil rapidly in fresh water for at least thirty minutes.

Once cooked, they can be added to any recipe or given to your hens. 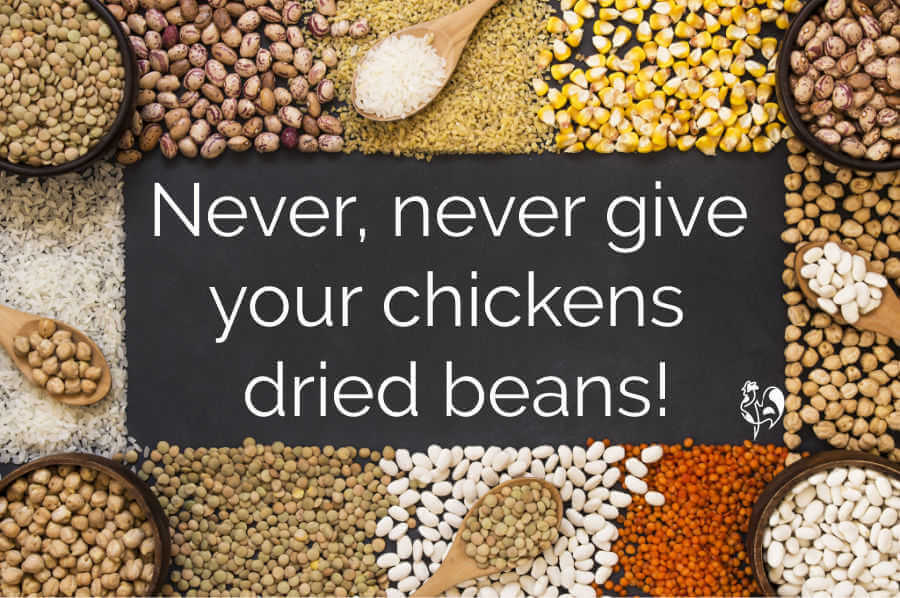 2.  Chickens should not eat anything mouldy.

Would you eat this tomato? Or give it to your family? 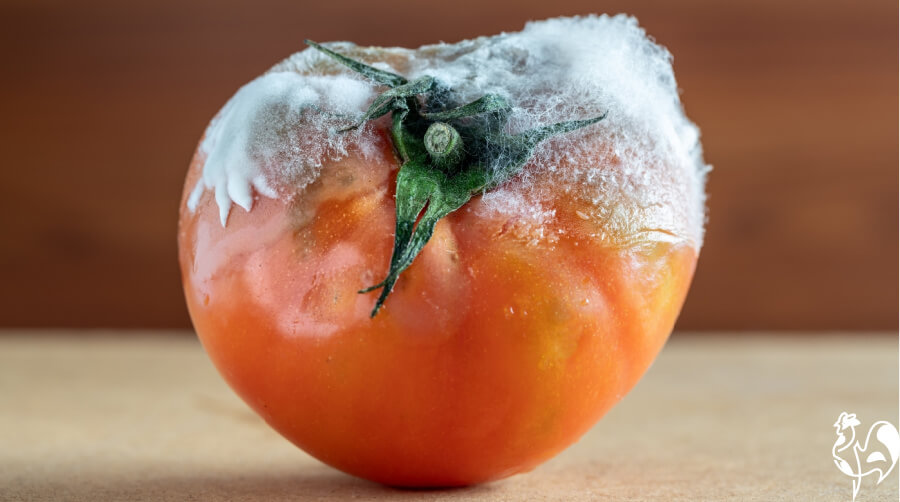 Thought not. Then don't give it to your chickens.

Some moulds, of course, are good. Penicillin was developed from a mould and some cheeses have mould deliberately injected into them.

But others, including the mould which grows on soft fruits, produce toxins and it's not possible to judge which moulds are good and which are toxic.

Some, in particular aspergillus flavus, the mould which grows on nuts, corn and apples, produces a toxin called aflatoxin which is known to contribute to the development of liver cancer in both humans and animals.(3)

Simple - don't feed your chickens food which has any signs of mould or is in any way going rotten.

It's equally important to make sure your flock's feed does not become damp, which is one of the mediums in which moulds and their toxins flourish.

3. Parts of the avocado should not be eaten by chickens.

Avocado is a controversial one. You'll see information all over the internet stating categorically that avocados as a whole are poisonous to chickens.

It's right to say that chickens are particularly susceptible to the toxin carried by the avocado, which is called persin.

In large doses, persin will cause birds to have heart problems followed by difficulties breathing. It can cause death in less than 48 hours.(4) 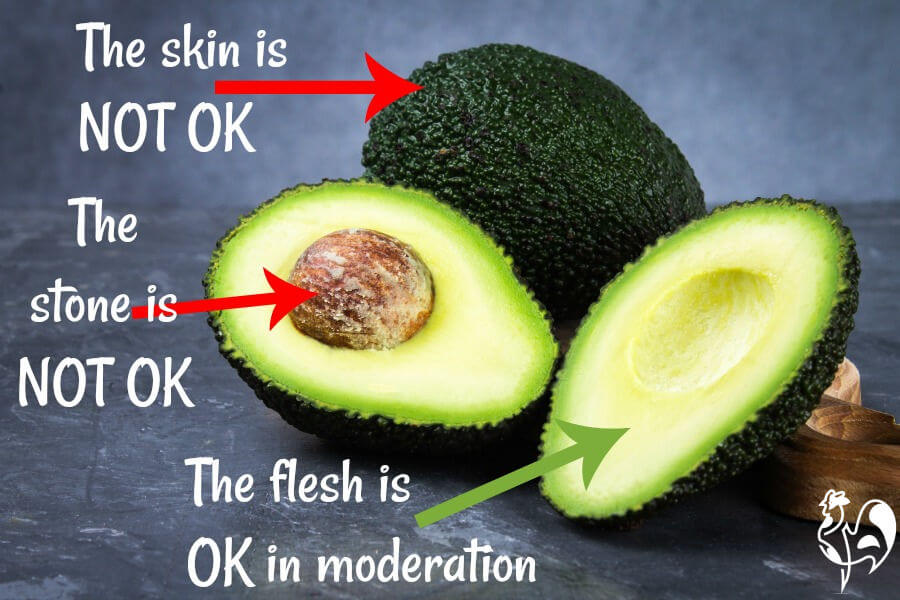 Persin is carried mostly in the skin and the stone of the avocado (and the bark and leaves of the tree, if you happen to have one).

The flesh has lower levels of persin but it still contains some because persin is fat soluble and leaches into the flesh from the stone.

Avocado is actually an excellent source of nutrients including iron, potassium and Omega-3 fatty acids. But you need to balance that with the fact that it does have toxins which are potentially lethal to chickens.

If for some reason you want to your chickens to eat avocado, give them the flesh only, and even then in great moderation.

Personally, I wouldn't give my chickens avocados anyway - I like them too much myself.

4.  Chickens should not eat green potatoes or green tomatoes.

My chickens love mashed potatoes. They would eat it until it came out of their little chicken ears.

I feed it them in moderation. Left-over cooked potato (including potato skins) is fine for chickens to eat but contains very few nutrients so isn't one of the best treats.

Green potatoes, though, are another matter entirely. 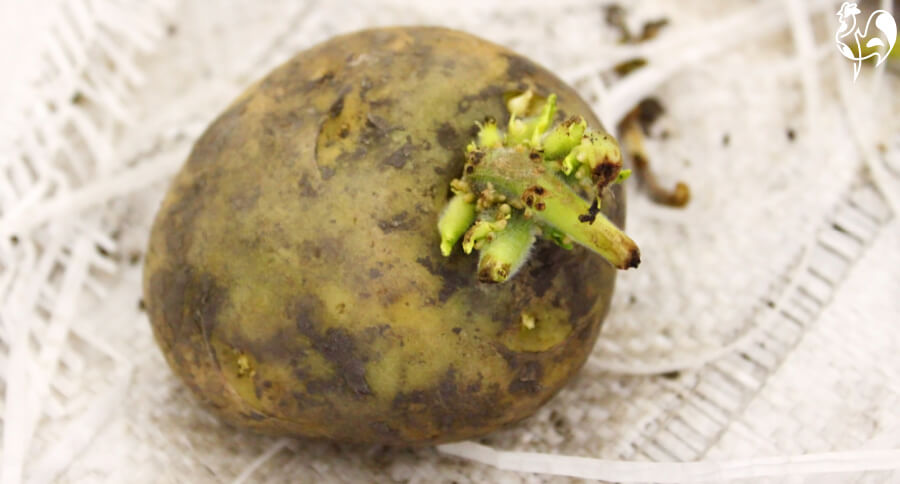 Don't feed your chickens potatoes which have turned green and sprouted.

The toxins found in green potatoes and green tomatoes are called solanin and chaconine, both of which are found in the peel, the flesh and the sprouts.

So any part of a potato which is green is poisonous for your chickens, as are unripened green tomatoes.(5)

Solanin is not altered by cooking, so don't think it will be fine if you boil some green potatoes for your flock. It won't be. It will cause drowsiness, paralysis and eventually, death.

Potatoes go green when they're exposed to light, so make sure you keep them in a cool, dark place.

If you find some leftover potatoes which have already gone green or have sprouted, do not feed them to your chickens, even if you cook them. And don't throw green peelings onto the compost heap if your chickens have access to it.

Green tomatoes should also be avoided but are slightly different in the sense that once they have ripened, the levels of solanin they contain are greatly reduced.

They can then be fed to your flock although, as with everything, they should be given in moderation.

5.  Chickens should not eat chocolate.

It's fairly well known these days that chocolate is harmful to some mammals, particularly dogs and cats.

But did you know it can also be fatal for your chickens? 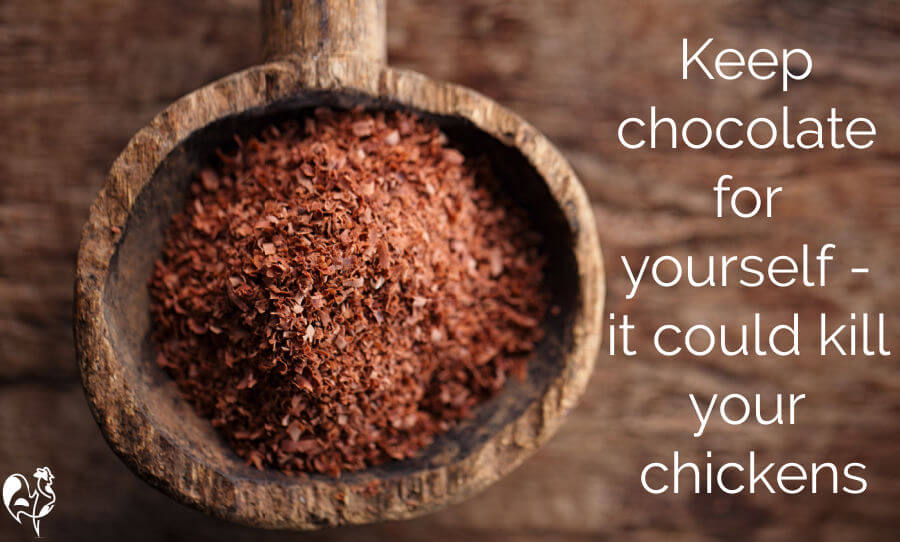 Theobromine and caffeine are the toxic elements of chocolate and are also found in some drinks - coffee, tea and colas among them. The darker the chocolate, the more theobromine it contains and the more dangerous it is.

Now, it's right to say that eating a few pecks of chocolate or some leftover chocolate cake is probably not going to do your hens much harm - depending on how much chocolate that cake contains and how much they eat.

But even something we might think to be as innocent as a packet of chocolate chips can prove fatal.

Chocolate is known to cause heart problems in birds which can range from an irregular heartbeat to full cardiac arrest. Death will happen very quickly - within 24 hours of eating the chocolate.(6)

So don't kill them with "kindness". Do your chickens and yourself a favour - keep the chocolate for yourself.

Feed your flock a good quality chicken feed, allow them to range on pasture if you can - and let them have some healthy treats instead. 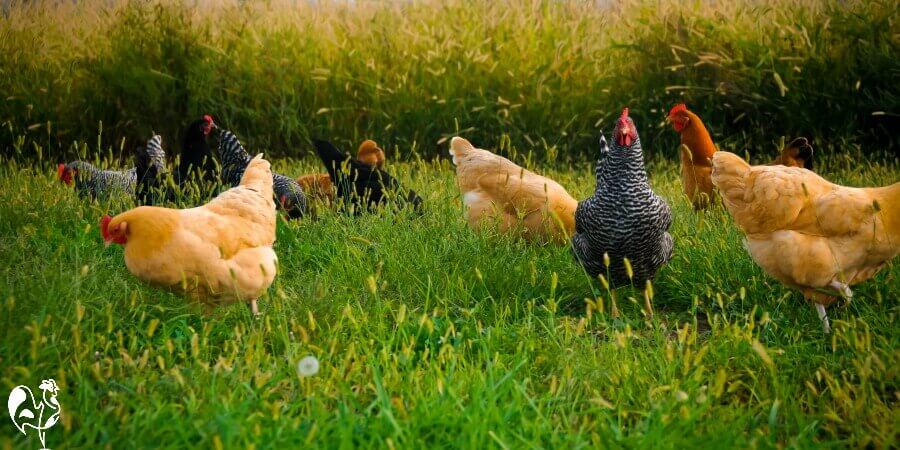 Free ranging on pasture is not always possible, but a great way to raise chickens if you can.

If you'd like to know more about feeding your flock to keep them in good health, you may find these pages helpful. 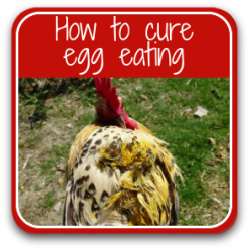 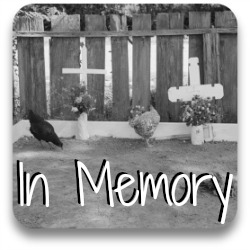 Please note: I am required by law to tell you that in Europe and the UK, EU and DEFRA regulations state that chickens should not be fed any foods which have been in a kitchen, whether the kitchen is a professional or a domestic one and even if the food has not been prepared there but only 'passed through'.

This includes meats, vegetables, fruits and kitchen scraps and it applies to all backyard chickens, whether or not you sell their eggs or meat to others.

There is a lot of inaccurate and misleading information on the internet about foods which chickens should not eat. In order to bring you evidence-based information I refer only to facts which have been demonstrated by peer-based research and review. These are the resources on which my information for this page is based.

1. U.S. Food and Drug Administration: 'Foodborne Illness and Contaminants'. May 2013.