Homemade, healthy treats for the new chicks in your flock! 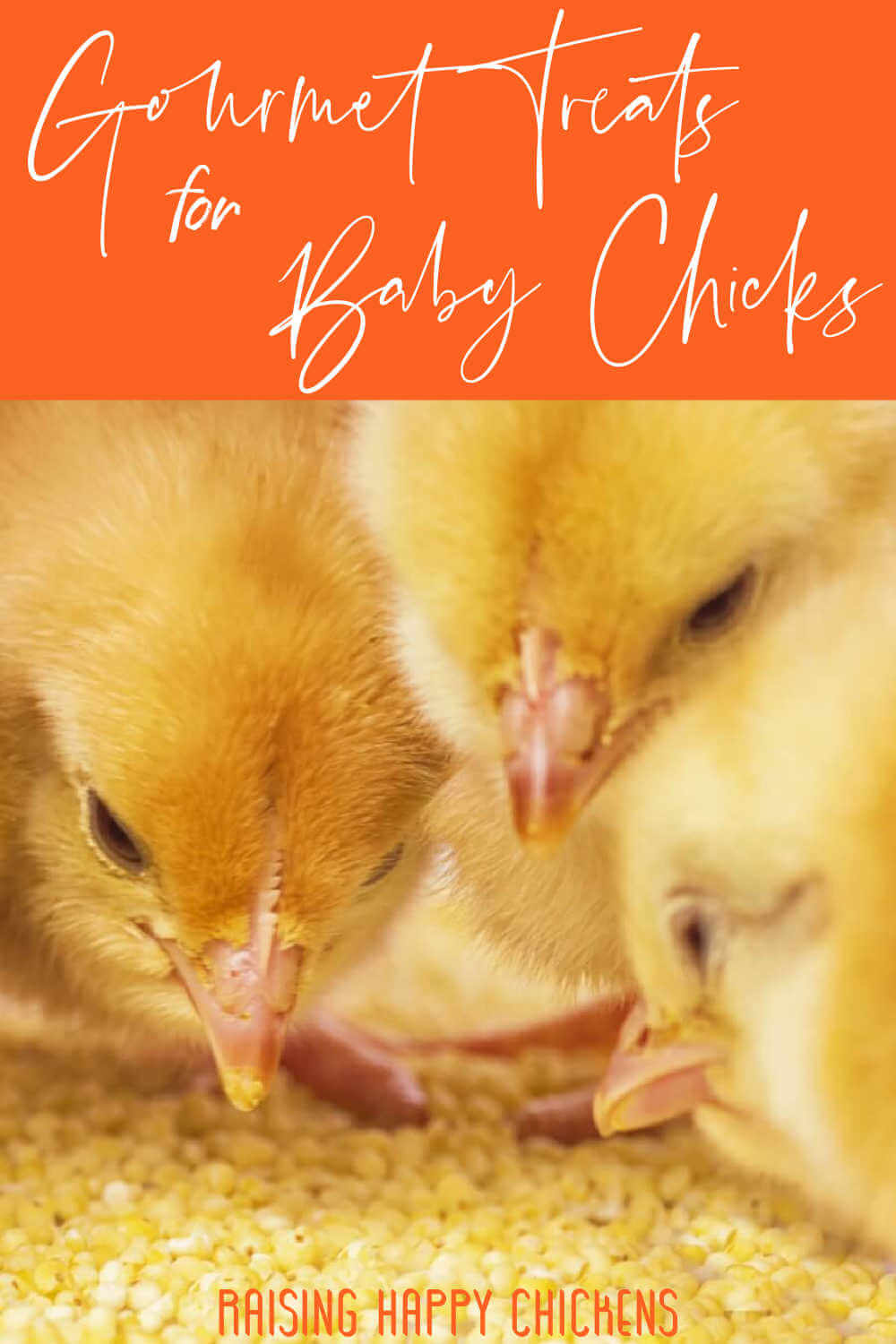 One of the most common questions I'm asked about newly hatched chicks is: "When can I start giving them treats?".

We all want our chicks to enjoy life, and there are some goodies which are both safe and healthy.

But it's important to remember that treats are not a balanced diet.

They are just that - a "treat" - something to be given in moderation, especially where chicks are concerned.

For more detail on what baby chickens should eat to remain healthy, see this page.

When is the right time?

A chick raised by a mother hen will start to eat "treats" like worms from the start, as she takes them outside. So, if we're raising our chicks as a mother hen would, some would say it's never too early.

But - and it's a big but - chicks are tiny. They don't have the capacity to process complex foodstuffs.

So they need good quality nutrition to see them through the critical time post-hatch. And they need to learn what their real food looks, tastes and smells like before they should be given anything different.

For that reason, avoid the temptation to give your newly hatched chicks any treats for at least the first couple of weeks after hatch.

What they need at that stage is a high quality, non-GMO, starter feed like this one.

How much is too much?

And if you do give treats - gourmet or not! - make sure the pieces are chick-sized. We'll look at what that means as we go through each one.

Why grit is so important.

It's critically important that, as soon as chicks eat anything apart from their starter feed, they have access to chick grit. They won't be able to digest food without it - and you'll have sick chicks on your hands.

With a mother hen, they'll pick up grit as they scratch around outside. For chicks in a brooder, we have to be like mother hen and provide the grit ourselves.

This is not the same as oyster shell - chicks must not be given oyster shell. Keep it for your laying hens.

Offer chick grit in a bowl, separate to their food. The chicks will instinctively take what they need.

But it's my number 1 recommendation for chick treats in the brooder.

Why? Because not only is lettuce a healthy treat - it can keep your babies entertained for hours.

How? Watch this video to find out!

Eggs - excellent for building up weak or sick chicks.

I know it sounds weird to feed egg to chicks, but it's my second favourite treat for a reason.

Eggs are full of goodness - especially protein. After all, the chick has not long ago been nurtured by an egg throughout the whole of its incubation and for at least 24 hours post-hatch.

So if you have a chick who is weak, or smaller than the rest, or being bullied and needs some extra care, think about feeding it some cooked egg.

I give it as a treat to all my chicks maybe once a week as they grow. It's important, of course, not to feed raw egg - make sure it's cooked.

The last thing you want is chicks getting a taste for uncooked egg...

Either scramble or hard boil one egg for every four chicks and feed no more often than once a week. Scrambled is fine for babies to peck at. If it's hard-boiled, mash it into smaller pieces.

Something a little more tasty now - sweetcorn. High in antioxidants(1), it's a great food for building up your chicks' immunity.

Again, it should only be given in moderation.

My chicks would kill for it, as you can see (notice the pot of chick grit - which one baby is sitting in!). 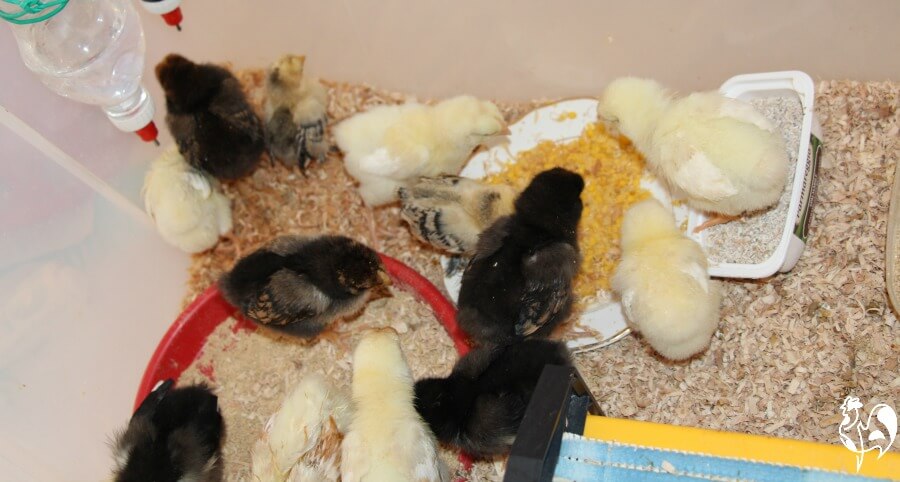 Sweetcorn - a favourite treat. Not supposed to sit on the grit though, chick!

Mine love canned sweetcorn, but it's important to check there is no added salt or sugar. If there is, either don't give it them or rinse it well before you do.

Corn still on the cob is too hard for very young chicks to peck off, so I avoid that until they're bigger.

If your chicks are three or four weeks old, they probably won't have a trouble with the large pieces. But it's a good idea to chop it into tiny bits anyway.

Easy to make and a great source of nutritious greens in the winter when there's not much else about, sprouted seeds also make for an inexpensive chick treat at any time of year(2).

I use sprouted lentils, and when feeing them to chicks I don't allow them to grow too long. About this size is right for babies. 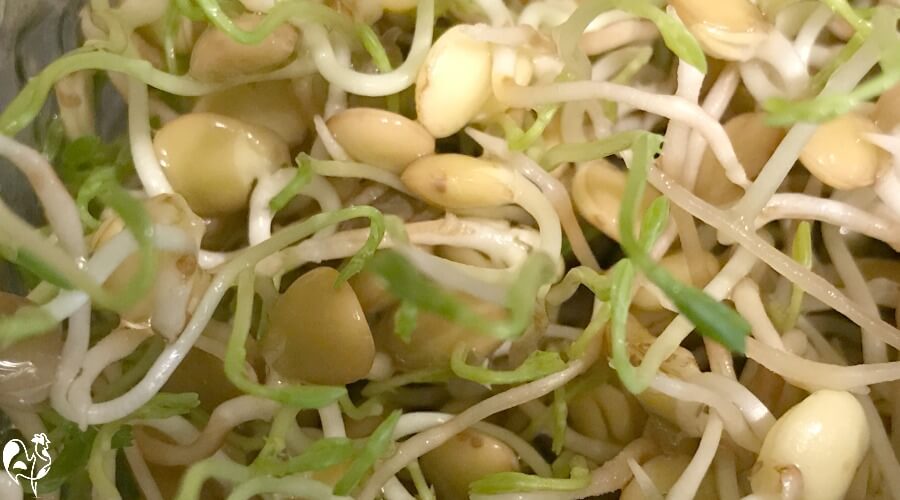 Sprouted lentils - a great source of nutrients for chicks.

For details about how to easily sprout seeds, take a look at this page.

For a cold weather recipe for lentils to help your chicks through the winter, this page about the benefits of lentils for poultry will help.

Sunflower seeds - grow your own for summer fun and chick health.

Grow them to add sunshine and fun to your summer garden. Chop the seeds up in the autumn to feed your growing chicks later in the year.

The seeds are ripe for picking when the flower head has lost its petals and is drooping, and the florets stand out above the seeds. 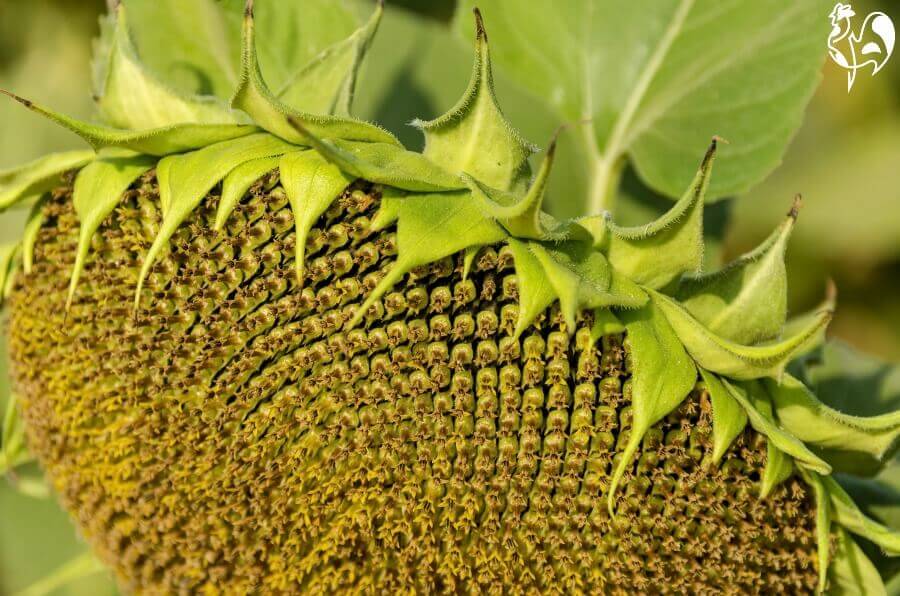 The seeds are ready when the flower head has lost its petals.

If you don't want to wait that long, you can of course buy the seeds online or at your local feed store.

Choose the black over the stripey ones - they have more nutrients(3). Whichever brand you buy, check that they're pesticide free.

And make sure for young chicks that you chop them into small pieces - the entire seed is much too big for a baby to tackle.

Again, feed in moderation - too much protein is not good for hatchlings. A teaspoon per four chicks, once a week, is more than enough.

For more detailed information about why sunflower seeds are so good for all your flock, and how to grow them, see this page.

Fruit and veg - but not five a day!

Chicks love fruit and veg, and they're generally healthy options for treats. If they're ripe and soft, it's fine to feed them whole and allow the chicks to peck, but anything hard needs to be chopped into small pieces.

In the case of veg, grating or spiralising them is a great way to feed.

You'll find out what your tinies prefer by trial and error. Some favourites I've found over the years are strawberries - probably the favourite - and grapes (cut up), ripe figs (I'm lucky enough to have a fig tree in my chicken run), apples and cucumbers - either grated or spiralised - and watermelon. 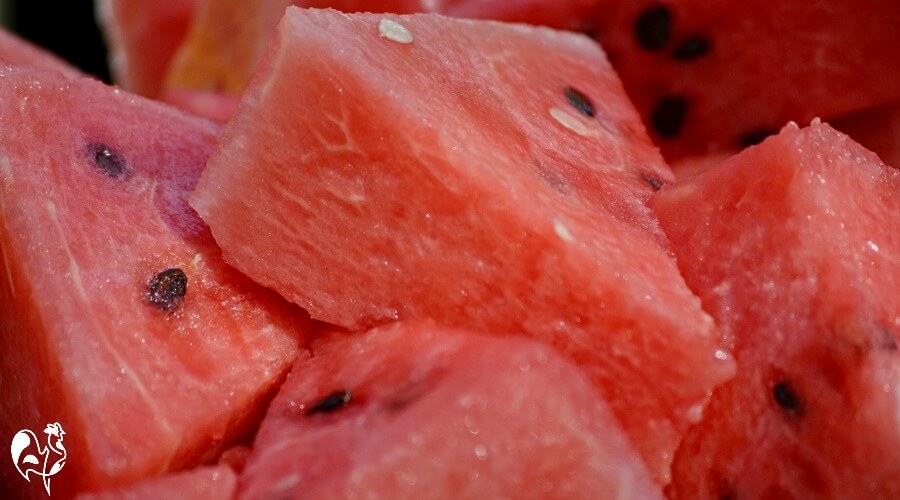 Watermelon can be a real boon in more ways than one. It's a very healthy treat - it has no fat, very high levels of Vitamin 'C' and it's crammed with antioxidants, which help prevent cell damage(4).

It is also is an excellent way of keeping your chicks hydrated, especially as they're growing quickly during the hot summer months.

Again, moderation. Fruits particularly have high levels of sugar - even if it is natural. So feed your chicks small amounts, no more than once or twice a week.

For information about which part of the fruit is good for your flock, plus two easy recipes to make sure your chickens benefit from it, see my detailed watermelon article.

Worms and bugs - the crawly favourites of all time!

A baby chick in the yard with its mother hen will be quickly introduced to all kinds of yummy treats. High on the list is worms and bugs - live, of course...

So if you're going to act like mama hen, you'll need to catch some yourself (or give it as a task for your children or grandchildren - they love it!). It's free, it's great pest control for your garden and it provides your chicks with treats, all at the same time.

If you can't face the thought of catching (or buying) live bugs for your baby chicks, think about buying some dried.

A live mealworm infestation can be a problem in large, commercial poultry facilities. Chickens prefer to eat them rather than their feed, and their diet and health then becomes unbalanced(5).

It's exactly the same for your own flock, and for your chicks.

Chickens of any age love mealworms. They're very high in protein, and they can be extremely useful at times of stress in their lives - moulting, for example, or following a predator attack.

And growing chicks do need protein. But they don't need to be overloaded with it.

So again - moderation. A teaspoon of mealworms once a week is plenty. I do chop them up for baby chicks, but once they're a month or so old, there's no need. They'll gobble them up whole.

While crickets are currently being researched as an alternative source of protein for humans, they're less common as a treat source for chickens(6).

Chickens of all ages love them, but with young chicks there's even more need to feed sparingly. Chicks do not need high amounts of fat.

Don't fancy catching some live crickets yourself? No problem - here's some done for you!

What not to give chicks as treats.

At the risk of repeating myself (many times!) I'm going to say it again: baby chicks should be given treats - even gourmet ones - in moderation.

Give one or two of the choices above no more than two or three times a week. Chicks need the balanced nutrients their feed gives them, and adding too many treats will seriously unbalance the mix.

There are other foods which are unhealthy, even dangerous, for baby chicks to eat. Long lawn clippings are first on my list, oyster shell is second, and all the foods on this page for exactly the same reasons they're harmful to adult chickens.

Be kind to your chicks - but make sure you don't kill them with kindness.

If you liked this article, you may find these helpful. 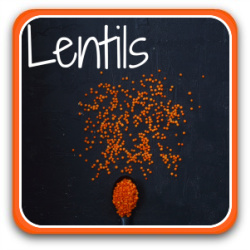 A lot of "facts" you'll find on the internet are often people's individual views, often based on inaccurate information repeated from poor quality sources.

The information I provide in this article and others is based not just on my own experience, but on evidenced facts from scientific, peer-reviewed research and evidence from highly respected and experienced poultry keepers such as Gail Dammerow.

Some of the sources I have used are these - click the link to read the full document:

2. Chandler, B: The nutritional benefits of sprouted lentils. Pub Livestrong, 2016.

5. Loftin, Professor K: Biology and Management of the Lesser Mealworm in Poultry Operations. Pub. University of Arkansas, Department of Agriculture, 2014.