Is chicken wire secure enough to keep chickens safe in their run? And if not, what is?

Whether you have a run extending to an acre or more or a small area contained in your garden or back yard, it needs to be safe for your flock. The perfect fencing for a chicken run needs to keep predators out and your chickens in. 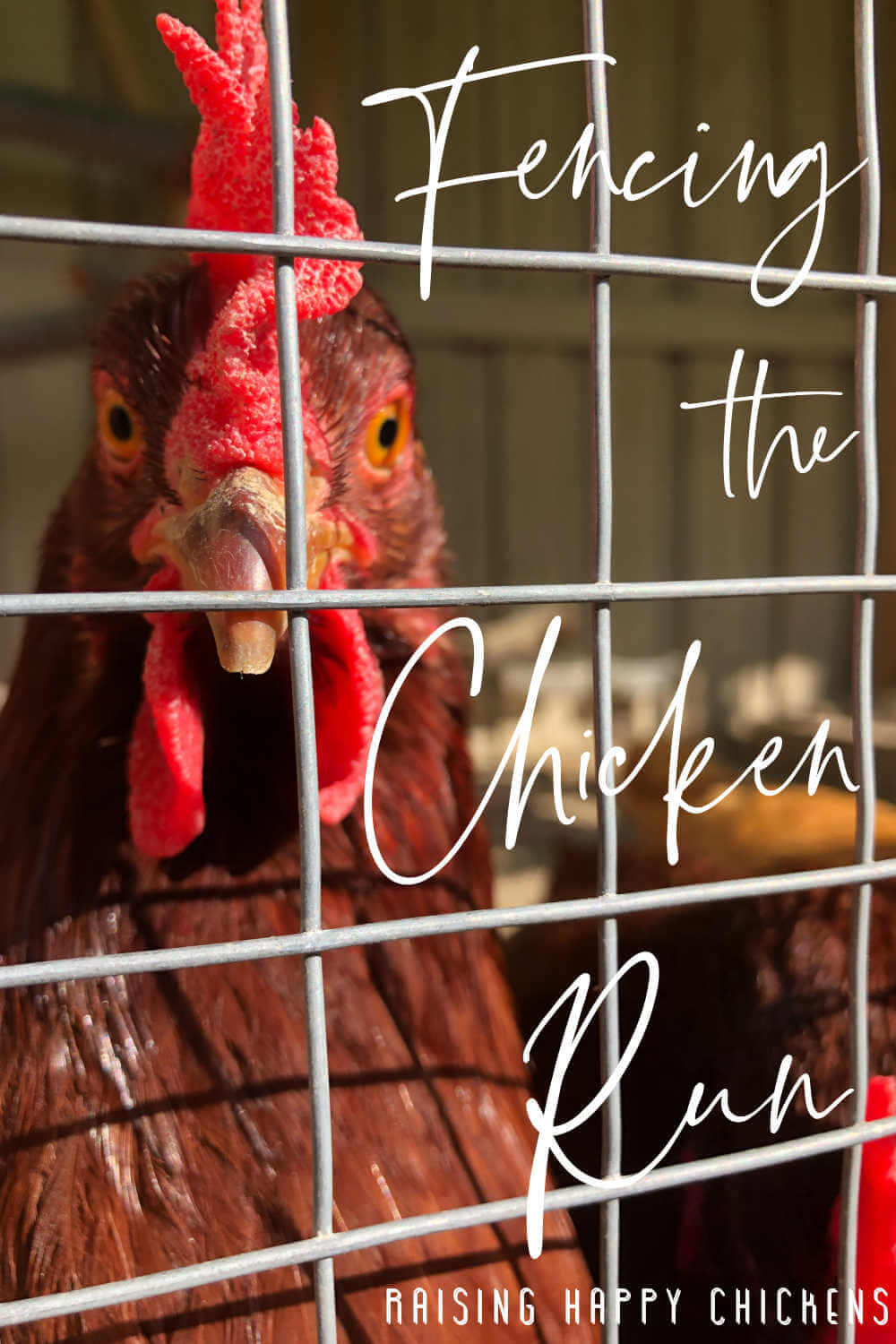 If you're new to chicken-keeping, free ranging might sound idyllic. What could be lovelier than seeing a flock of hens wandering through pasture on a warm afternoon?

If you're more experienced and have tried free ranging before, you'll know it's not often like that. Even "supervised free ranging", when someone remains outside with the flock, is not enough.

Predators are waiting, and chickens are easy prey.

So having a secure chicken run is critical to the safety of your chickens.

In this article we'll look at fortifying a large run, including what type of fencing works best, what doesn't work at all, and introducing an excellent chicken fencing solution for a small run.

Here's what the article covers.

Click any of these links to go straight to that section, or continue to read.

How to build it

Chicken wire fencing: does it work?

The short answer is "no".

Wire like this – the standard roll of chicken wire – is inexpensive and easy enough to work with. It will certainly keep chickens in (but not baby chicks – the holes are big enough for them to get through).

But it's simply not strong enough to keep predators out. 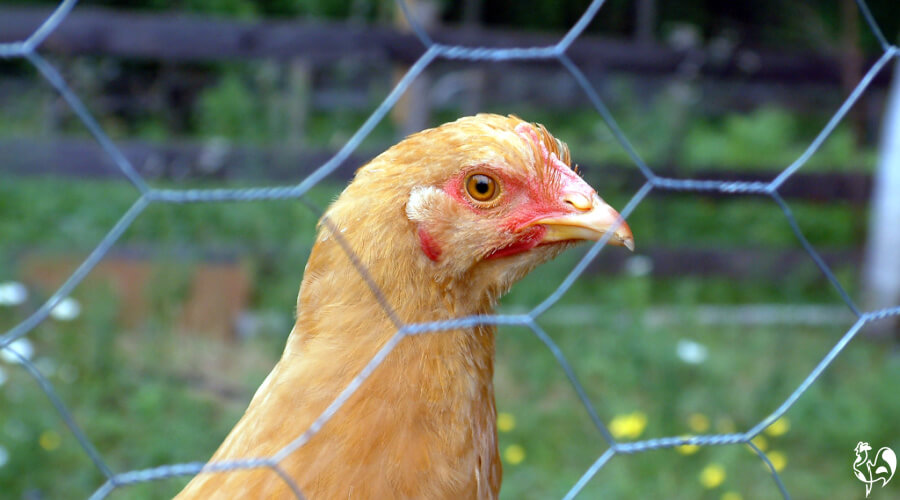 Chicken wire like this is not strong enough to keep predators out.

The downsides of using chicken wire as run fencing.

This kind of movable netting can be useful. Mine is Omlet's version which is excellent: strong but light enough for one person to install, tangle-proof, with smaller holes at the bottom, making escape for adult hens impossible, although one of my chicks did once get through.

And it comes in different lengths, which is useful. It's also over a metre (4 feet) tall, which is more than most other netting. 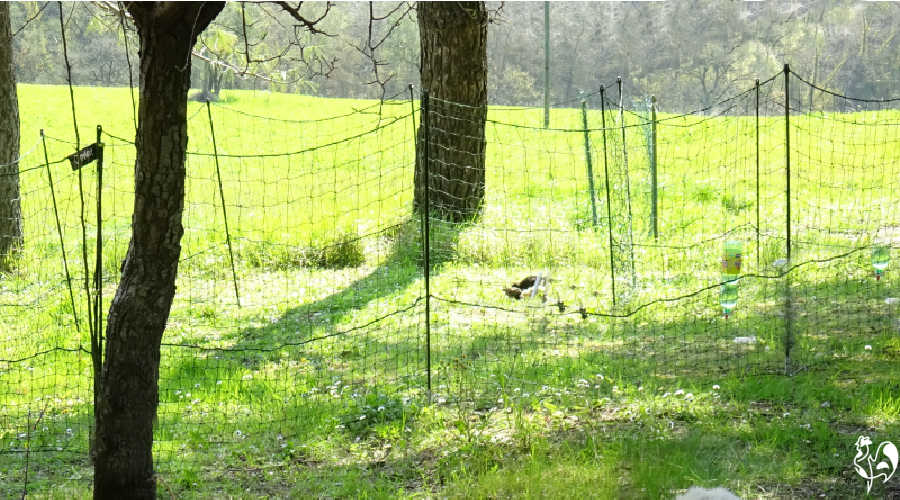 The downsides of portable netting.

There is no way this netting is predator proof.

The poles could be taken out pretty easily, being only buried by about 6", the netting could be pushed over by a fox or dog and easily ripped by the sharp claws of a raccoon.

I use this within my fenced run, to allow baby chicks to have their first taste of the outdoor life.

It keeps them separate from the big girls (who would bully and possibly kill them) whilst allowing them to be seen and heard.

But I always make sure I'm out there with them. And if I need to leave them for any length of time, one of my Maremma Livestock Guardians stays with them.

So use this for that kind of situation, but use a more secure fencing for the perimeter of your run.

Full disclosure: while I have used all the other types of fencing in this article, I have never used electric netting like this one.

Those who have say it effectively protects chickens by giving any would-be predators a small electric shock – enough to frighten, but not to kill. Chickens and other domestic animals seem to know instinctively not to touch it.

It's very similar to the Omlet netting in being easy to set up, the difference being that the vertical rows are electrified by being attached to an "energizer" battery –  this one relies on solar power.

Setting it up is more complicated than a non-electrified run, in that the current has to be kept away from grass.

This short video is a clear explanation of how to assemble and place electric netting.

The fencing he uses is this one, which has excellent reviews.

Remember, it also need an "energizer" such as this one.

Any downsides of electric netting?

This is the type of fencing I use on my (very) large chicken run. It's not cheap, and it's not perfect, but it's as close as it's possible to get.

The chain link design is particularly strong and difficult for predators to break into.

Usually covered in PVC, the plastic coating makes sure there are no sharp edges to harm our chickens, pets or children, and the green finish makes it blend into the environment reasonably well. 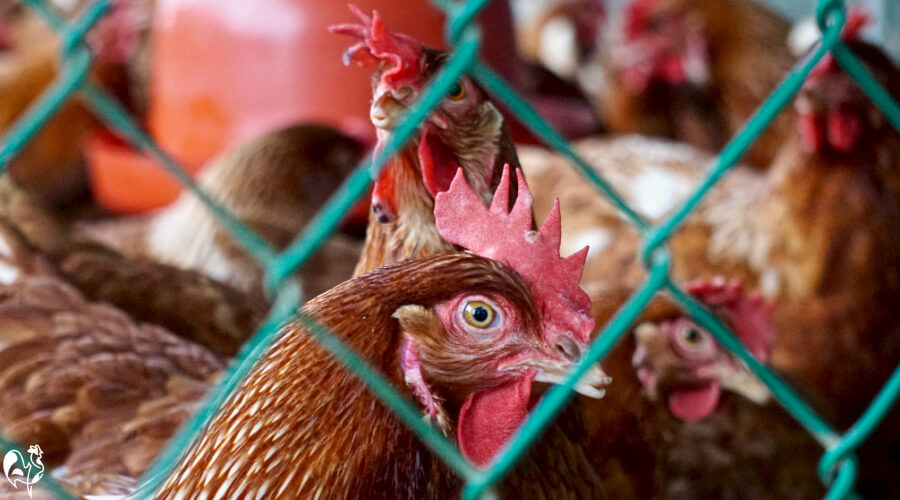 The downsides of galvanised fencing.

How to create a chicken run with galvanised fencing.

Whichever type of strong fencing you choose, it needs to be...

Step 1: dig holes for the posts.

﻿If you're planning to fence a large chicken run, the following information is based on how I had my own chicken run fenced, using galvanised fencing. 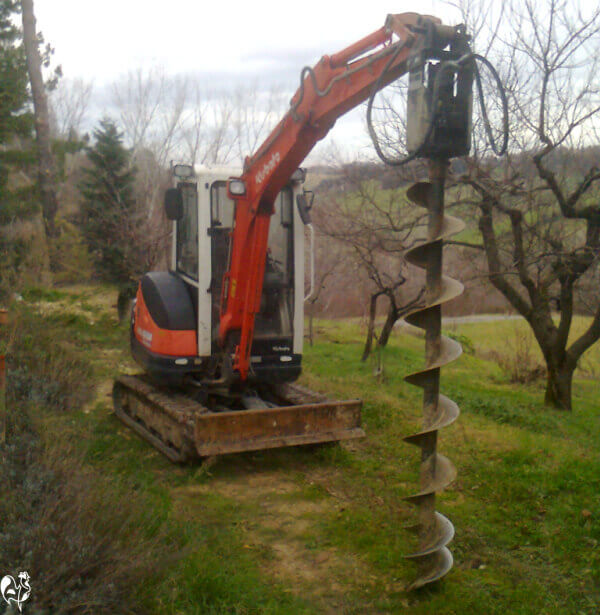 My run is a very large one, and the ground is a mix of stone and clay soil.

It wasn't an easy or a cheap project, but in terms of protecting my flock it was worth it.

Having said that, there's no better protection than my Livestock Guardian Dogs...

It started with a local builder providing a very large hole-boring machine, to create the spaces for the metal posts. It may seem a little over the top – but no bear will ever get those posts to go anywhere!

Place the posts at intervals of one metre (just over three feet). Any further apart and the fencing, which is quite heavy, would tend to sag.

Step 2: dig a trench between the posts.

To make the fencing secure against digging predators (foxes, for example), it should be buried at least 30 - 45 cm (12" - 18") down. That provides an effective barrier, and few predators are canny enough to carry on digging below that level.

This isn't easy to do because the fencing is heavy. At least two people need to be involved (we had four because the run is so large).

It should be attached to the posts with galvanised wire, and have regular wires running through it which can be tightened if the fencing becomes weighed down and begins to sag.

To prevent that happening, it helps to check the fencing regularly and cut back any trees, weeds or climbing plants which are causing it to become distorted.

Step 4: attach a "skirt" at the bottom of the fencing.

This is an important step.

We bury the fence because many predators will try to burrow underneath. Adding a barrier which goes out from the bottom of the fence for about 30cm (12"), forming an 'L' shape, is another layer of protection.

I used chicken wire for this and attached it with zip fasteners attached to both parts of the 'L' in a figure 8.

If predators wanted to, they could rip through the chicken wire and bite through the zip fastener. But most won't bother. They'll try something else or, hopefully, give up altogether. 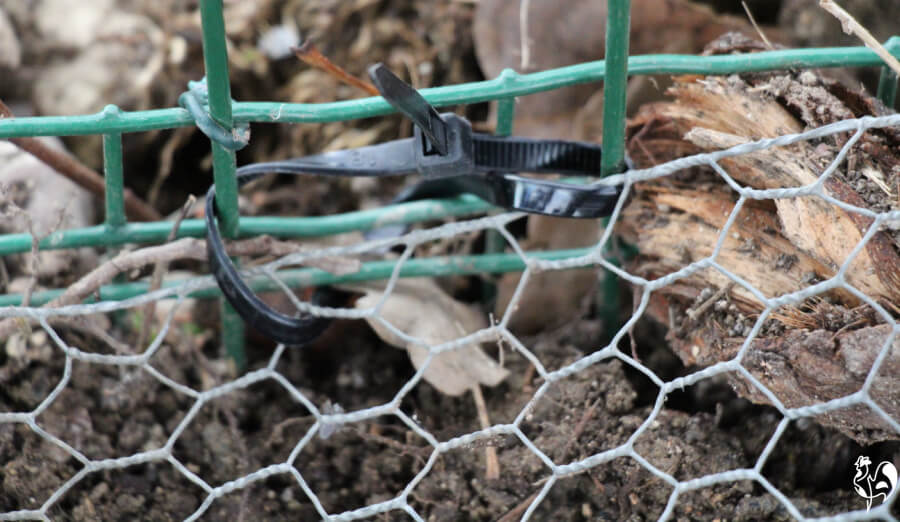 An 'L'-shaped "skirt" buried at the bottom of the main fence can help deter digging predators.

Here you can see the chicken wire spread across about 12" of ground from the fence. 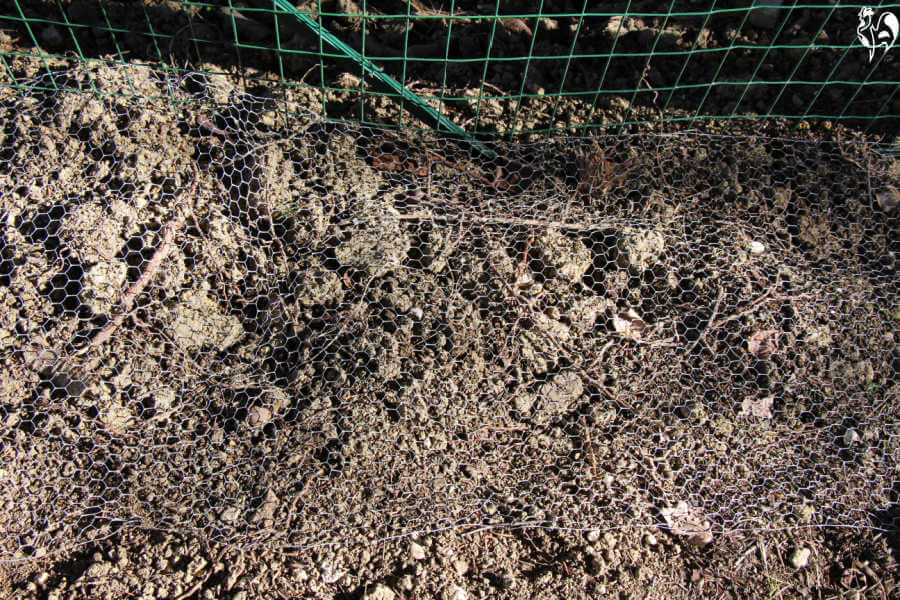 The layer of mesh "skirt", running below ground level and 12" out.

Step 5: cover the skirt with earth.

Once you've secured the "skirt" right round the run (warning: it takes hours!) it's time to cover it with earth and, preferably, grass.

The grass then grows down through the chicken wire skirt and digging beneath it is virtually impossible.

Mine has been in place now for about ten years, and has never been breached.

You need a way to get into the run!

Adding a gate is potentially a weakness in the design. If possible it should be metal, not wood (wood is too easy to gnaw through), the same height as the fencing, and secured with a sliding bolt which latches down.

Raccoons are excellent at undoing latches, so if they are one of your predator groups it would be wise to add a padlock.

Step 7: sit back and enjoy your work!

Once that's done, you have a secure chicken run. Enjoy it, in the knowledge that you have made your chickens as secure as it's possible to be.

The perfect run for a smaller space: Omlet chicken fencing.

If your coop is in a small space such as a garden, you won't necessarily want to go to the time and expense of adding such a sophisticated fencing design. And it won't make your garden look very pretty...

In that case, my recommendation would be to look at runs from Omlet – the company who make the popular Eglu chicken coops. I own an Eglu Cube, so I can testify to the quality of these products.

The Omlet runs which attach to the Eglu coops are built specifically to prevent predators. The mesh fencing is incredibly strong and the holes are too small for anything but the smallest of field mice to get through.

There's a "skirt" of the same wire mesh, held down with special plastic screws which means it will lie flat on even uneven ground (which mine is), and the door latch fits through two loops, so is not easily opened. 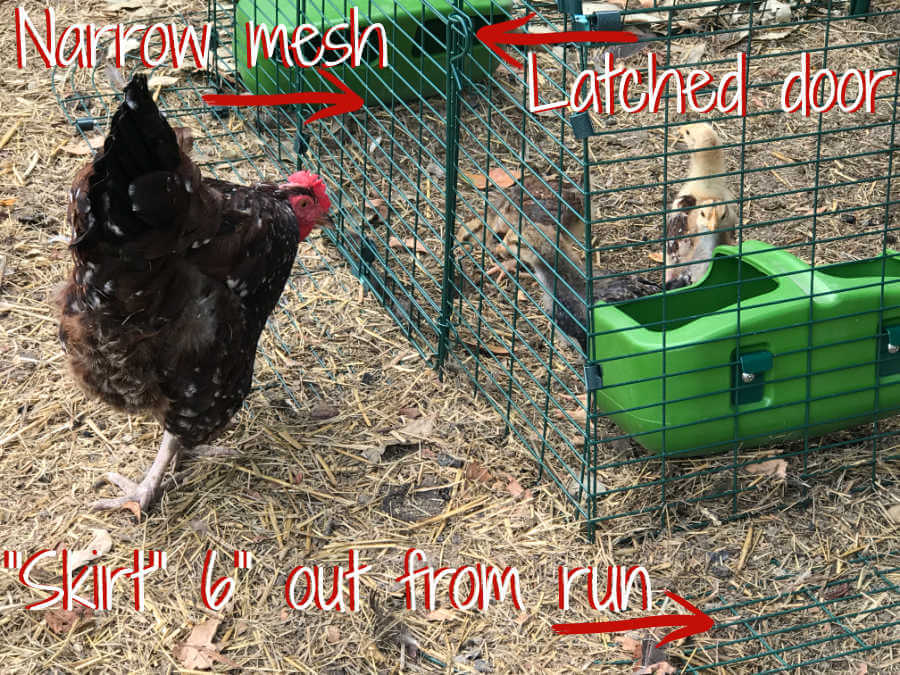 The run attached to my own Eglu Cube.

It's possible to buy a small run at the same time as a coop. Mine is the height of the Eglu Cube, and 3 metres (nearly 10 feet) long.

My only issue with it is having to crawl inside to get to chickens who refuse to roost at night!

The smaller runs are designed to work only with Omlet's own coops. So what if you don't have one?

I use my Eglu Cube chicken coop to house new chicks, or adults who need to be separated for some reason.

My aim is to upgrade to one of the company's walk-in runs. As secure as the small runs, they have the same mesh design, the same "skirt" and an even more intricate door lock which will confuse any predator.

They can work either with Omlet's own coops, or with any other small stand-alone coop.

And the best thing? They're as predator proof as you can get, whether that predator is land- or air-based.

Read my full review of all Omlet's chicken runs.

Other pages you will find useful. 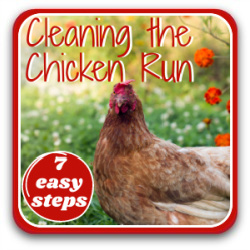 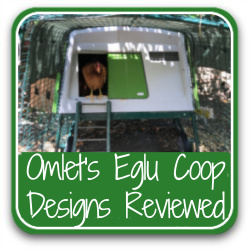 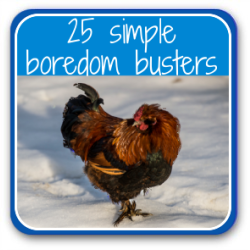 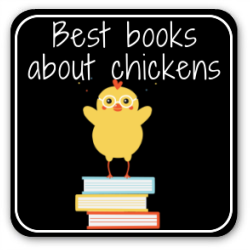