What should chickens eat to keep healthy and happy? 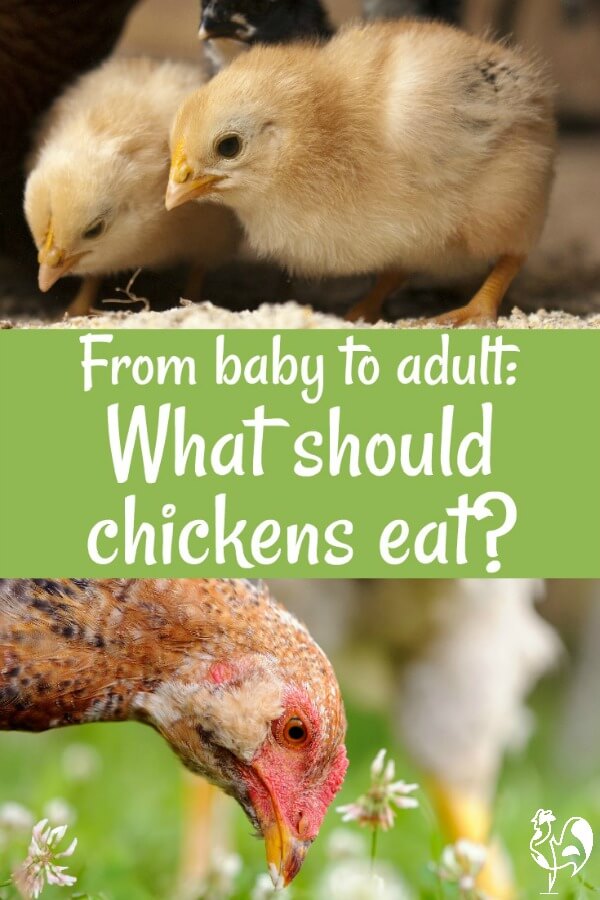 It's critical to your chickens' development that they get the right balance of protein, fats, carbohydrate and vitamins.

If you're anything like me, you will be completely confused as a new chicken keeper.

When I started keeping chickens I couldn't work out what that balance was, and the information was scattered all over the internet.

I wrote this article so that you won't be confused. It's based on my own experience together with information I've learned from these reliable sources.

Which is best - commercially produced or 'make-it-yourself'?

Many people worry about the contents of commercial food and so would like to make their own.

Personally I don't do this for one simple reason: the balance of nutrients is a very delicate one which commercially produced feed has come to by scientific methods.

It's very difficult to get the balance right when making your own. And an unbalanced diet can create health problems in the flock which I'm not prepared to risk.

It's not hard these days to find a source of food which is organic, free of antibiotics and free of genetically modified ingredients.

I recommend some good quality products during the course of this article. But you don't need to follow my recommendations, and buying locally is likely to be less expensive anyway.

Just ask at your feed store for a good quality product which is chemical and GMO free.

Use these links to skip to a section if you're looking for something particular. 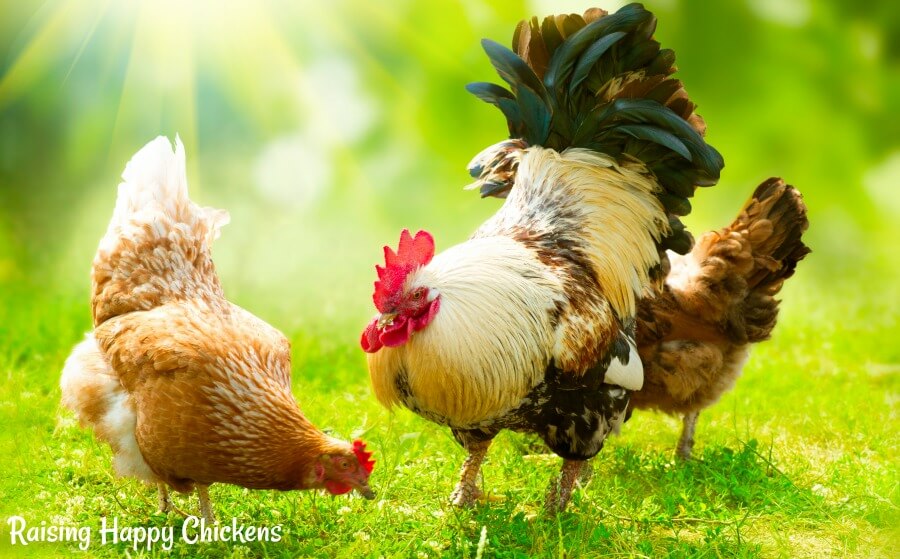 Free ranging your flock is great if you can do it - but what else should chickens eat? 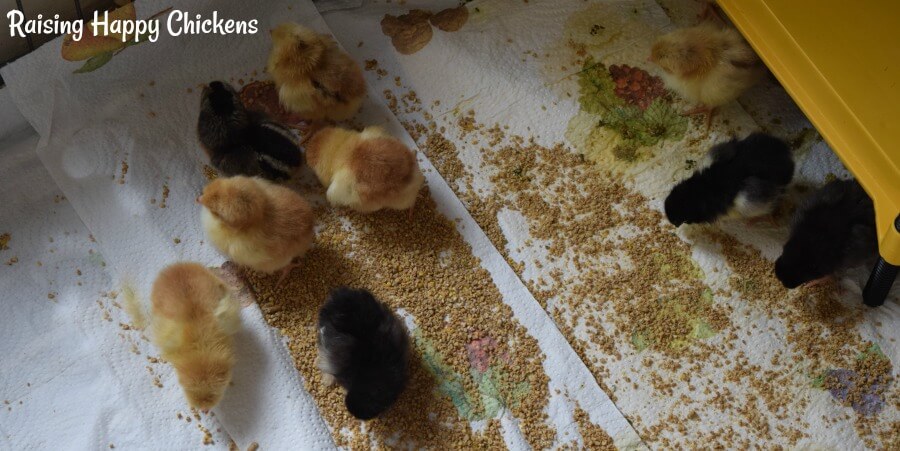 Dropping chick crumbs onto kitchen paper will stimulate chicks to investigate by pecking.

Why 'about' two months?

Grower feed : Pullets and cockerels (roosters)  from 8 weeks to about 18 weeks.

Both male and female chickens should be moved from chick feed to a grower feed at around 8 weeks. They should remain on this until shortly before "point of lay" - the age when females begin to lay eggs. 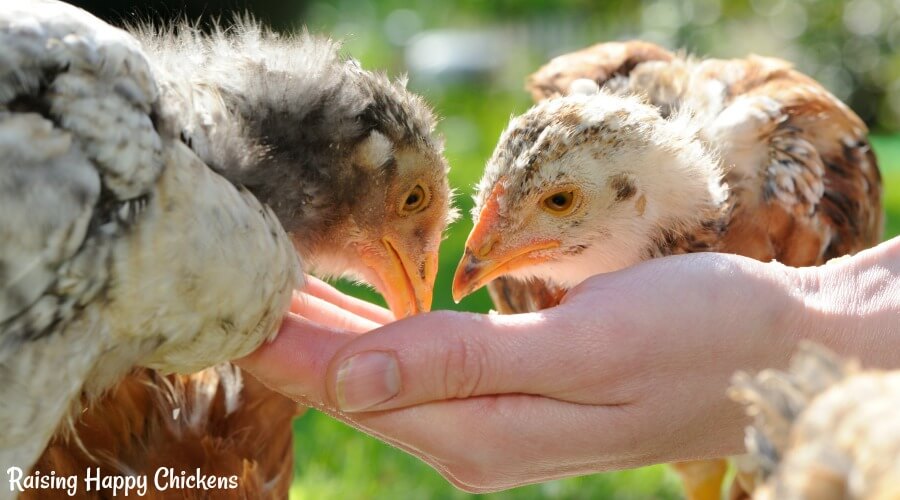 Encouraging your growing birds to eat from your hand makes them easy to handle later. 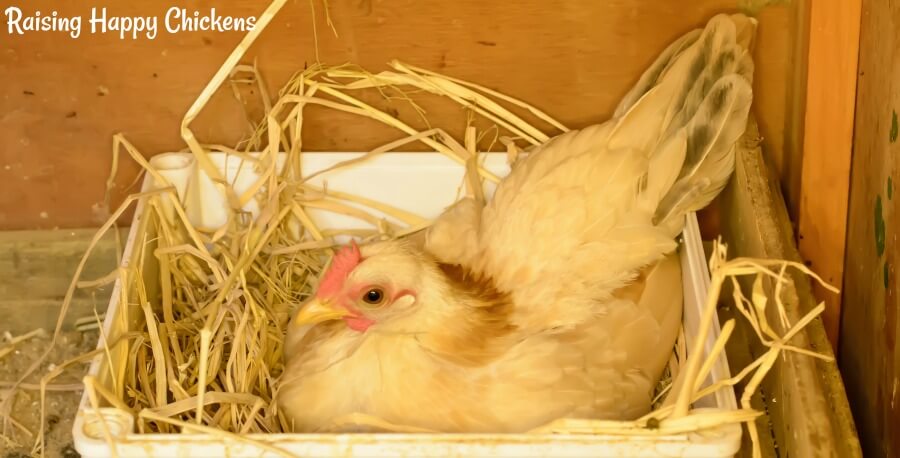 What should roosters (cockerels) eat?

Will layer feed harm them?

Why do people recommend it? 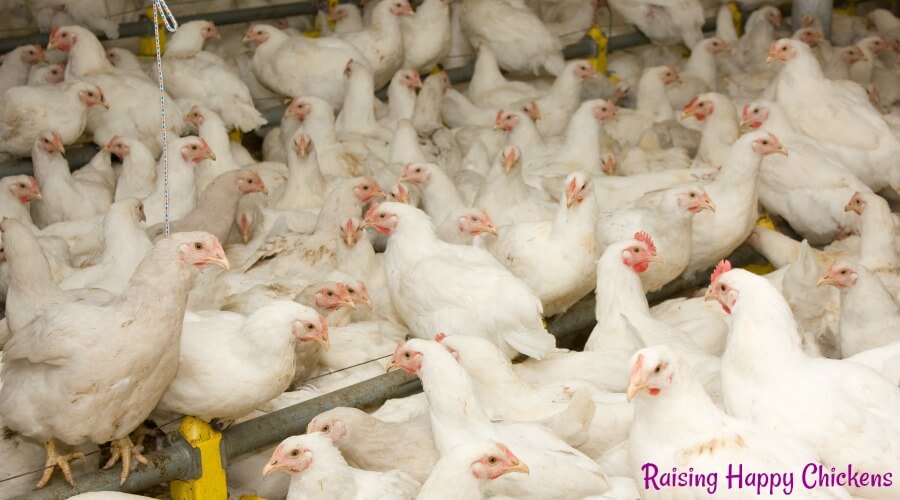 Even chickens described as 'barn-raised' are often in crowded conditions and need medicated feed.

GMO feed has been given to chickens in the commercial farm industry since the mid-1990s. Many food products available to backyard chicken owners contain genetically modified corn.

Government departments will state categorically that :

"There is no food safety — or any other risk — to the health and well-being of consumers when they consume chicken or other animal agriculture products (e.g. eggs, dairy), which have been raised with genetically modified feed ingredients". (National Chicken Council, 2012).

Any product that has the label 'Certified Organic' is not permitted to use GMO ingredients. It will generally also be prominently labelled 'Non GMO'.

The only drawback of non-GMO feeds is that they tend to be more expensive. But many backyard chicken owners, including me, feel the additional cost is worth it for the peace of mind of feeding a natural, organic product.

More about grit and oyster shell.

Chicks should eat grit as soon as they begin to eat anything apart from commercial feed.

Laying hens need to eat oyster shell from the point immediately before they begin to produce eggs.

This article deals with why they're such a critical part of the diet, when to start providing and how to offer them.

Just click on this picture to find out. Missing it could cost you dearly.

3. Ussery, Harvey : 'The Small Scale Poultry Flock : An all natural approach to raising chickens and other fowl for home and market growers'. Pub. Green Press, 2011.